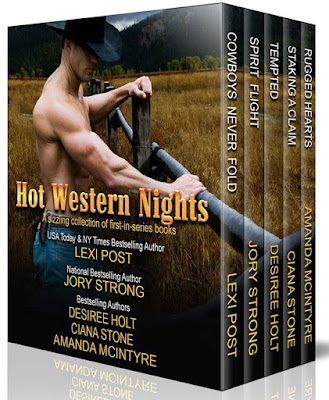 Yes! The cat is officially out of the bag!

My book is one of 5 western stories, all first in a series. That means if you like the first book, there are more to read!

The whole set is only 99 cents and is available for pre-order on Amazon. Talk about a deal :-)


Cowboys Never Fold, Book 1/ Poker Flat Series by Lexi Post
Wade Johnson agrees to honor a debt by working a three month stint as stable manager of Poker Flat Nudist Resort, but the closer he gets to discovering why the last managers left, the more he craves his sexy, smart boss, Kendra Lowe. To win her heart and save her dream, he will have to go all-in and that could mean baring more than his soul.

Spirit Flight Book 1/Thunderbird Chosen Series by Jory Strong
Betrayed, terrified, and running for her life, a desperate attempt to escape her pursuers sends Marisa over a canyon rim and plummeting downward. Left to die where she’s fallen, she regains consciousness in a cave with a warrior who makes her heart beat to the sound of an ancient drum, and whose possessive touch and heated glances claim she’s his mate. Ukiah cares for her. Makes love to her. Conquers her with pleasure. But a choice to leave the cave leads Marisa back into danger—and to the lover whose spirit takes flight in the storm.

Tempted, Book 1/The Castillo Ranch Series by Desiree Holt
Shea Prescott was astonished when millionaire Cruz Castillo chose her to design his new home on his ranch. They hardly traveled in the same circles. But Cruz had been hot for Shea since he first saw her and at their first meeting the chemistry between them ignited. She was hesitant to involve herself with him but the temptation became too great to resist. The question was, what would happen next.

Staking a Claim, Book 1/The Whisperers by Ciana Stone
Lust was a horse he could ride. Love? He didn't believe in love. Until she walked into his life and changed everything. Jed Nash had a few simple rules in life. (1.) Family always comes first, (2.) Know when to keep it in your pants, (3.) Don’t mix business and pleasure, and (4.) Don’t believe in love. All it brings is misery and heartache. He had no trouble following his own rules. At least not until the new trainer on his ranch shows up. He was expecting a man. What he got was a woman who had him battling attraction that was hot and wild. Sure as sunshine, if she stayed he wouldn’t be able to keep his hands off her.

Rugged Hearts, Book I/The Kinnison Legacy by Amanda McIntyre
Scarred by loss and betrayal, Wyatt Kinnison has steeled his heart from women and focuses on being head of the ranch left to him and his brothers as their legacy. When Aimee Worth, lost and cold on a winter’s night shows up on his doorstep and rankles his frozen libido, she turns his cocooned world into a tailspin. Aimee didn’t expect to find her Mr. Right, but melting his icy cowboy heart was a challenge this mustang woman was up for. “Raw Charm...one to read.” ~Publisher’s Weekly