Okay, The Butterscotch Martini Girls blabbed this week about bad wedding proposals, so I dove back into my old archives and dragged out this blog I did a couple of years ago.  So after you read this, be sure to follow the link at the end to watch this week's blab...there are lots more great (and not so great) proposals.  And you do NOT want to miss seeing Dani Petrone's wedding pictures...they are a HOOT!!!

Okay, while looking for funny stories about typos or grammatical errors, I ran across some OMG bad wedding proposals!  Did you know there are dozens of bad video and pictures of marriage proposals gone bad?  How embarrassing!  Imagine the poor schmuck who has found the love of his life (or thinks he has), only to be publicly humiliated when he goes down on one knee to propose.  And what I have found is that there are as many creative ways to turn a man down as there are ways to propose.  Well, before I get too far into it, let me just give you some of my runner-up favorites for bad ways to propose. 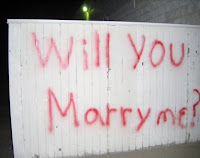 First, there’s the guy who uses a can of spray paint to tag a fence…probably his girlfriend’s parents’ fence.  Won’t daddy be proud of HIS little girl’s choice?!  I think not.  This guy thought he was being creative………uh, not so much.  Run, girlie!  This guy’s gonna do 3 years for defacing expensive public property, and then he’s gonna graduate to torturing kitties and ultimately go to the big house for murdering his wife in her sleep…you DO NOT want to be her…JUST SAY NO!

Then there’s this one.  I can’t decide if the guy’s trying to be cute or is just a bad speller and doesn’t own a dictionary or Google, or have a friend who can spell.  Perhaps there should be a rule that men have to have direct supervision when planning a proposal that’s more than just kneeling at the dinner table with a ring box in his hand.  Dude, there's an "A" in marry!  This proposal is for an entirely different type of event.  Points for the flowers, though. 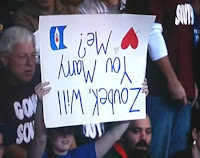 This girl gets props for trying.  She obviously has figured out that the sports event love-cam is the way to get her man’s attention.  (You have to know your target audience.)  But, honey, you gotta hold the sign right side up……..you can’t give them too many outs.  I can see this ending up in divorce court.  “But, Your Honor, I didn’t know she was asking me to marry her.  The sign was upside down.  I thought it said, “Would you like a bratwurst?” 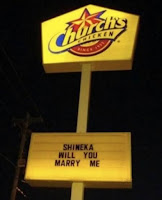 This one I love because of it’s simplicity.  This man obviously knows Shineka’s weakness and he’s not above exploiting it.  I hope she said yes because I’d love to know that this one worked!  LOL

Okay, this one could be at the top of the heap for bad ideas…Facebook, Really?

But the details behind this, when you really dig a little deeper, show that this guy is really one lucky bastard.  His girl was taken back at first, but then she was smart enough and creative enough to find a way to make lemons out of lemonade.  She says yes, but with the caveat that he’s got nuthin’ to say from this point forward about how much time she spends on the computer…after all, that’s how he got her.  Hmmm…I think this guy is up for a lifetime of being out-maneuvered.   Shoulda thought that one all the way through, dude!

This next one is just really creepy to me and I think you'll understand why.  I just don’t think I want to be laying on an examining table shivering in a paper gown with cold steel equipment shoved up my vijayjay and have some yahoo (no matter how much I love him) hold up a diamond ring and ask me to marry him!

WTF?  Really?  Good thing they make you take your shoes off for a pelvic exam or that dude mighta found a 4-inch spike heel up his left nostril.  Ick! 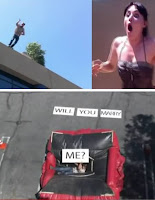 Okay now, I’m really torn over this next one.  I think it’s sorta cute that the guy went to all this trouble and I will give you the link to the video too so you can see it in live motion.  He seems really sweet and sincere and it’s kinda cute until you see the panic on the girlfriend’s face.  He scared the living bejeebies right outta her and if I’m her, I’m not sure he’s gonna live past today.  That better be one big ass ring!

And this one just boggles my mind because…well, just because.  I almost have no words for this one.  I don’t know how any man in his right mind could think this is a good idea.  The guy proposes by peeing the message in the snow.  Not cute, not pretty, not classy…and yet, she probably said yes.  I guess love truly is blind!

Unfortunately, this last one is very sad.  But if you are as twisted as I am, you will laugh…I guarantee it.  There is that split moment when the girl’s reaction just makes you guffaw, right before your heart plunges in sorrow for the poor young man.  But I’m sure it served to make him a stronger man, perhaps a better chooser of women in the future, and he’ll choose a quiet and private place next time…without the train and without the musicians, or maybe just singers who aren't holding weapons.  LOL

I hope you enjoyed this little stroll through marriage proposal land.  Guys, there are some lessons to be learned here about what to do and what not to do.  Girls, I think there is something to be learned from the way a man proposes…and it might be your very last chance to make the right choice. Choose wisely!

Now head on over to watch as the Butterscotch Martini Girls blab about weird, unusual, and bad wedding proposals.

(My thanks to Grace Murano at 12 Hilariously Bad Wedding Proposals http://www.oddee.com/item_98074.aspx for the pictures used in this blog.)
Posted by Kayce Lassiter at 1:00 AM