For those who have stuck with me these last few years and for those who have just discovered my books and are ready for the next big adventure, I wanted to say thank you by discounting my new romantic suspense novel Melting Point, which will be released on March 4, 2016. From now through Christmas preorders will only cost 99 cents. Once Santa's gone, the promotional price will take off with him. So, what are you waiting for? Your next adventure is just around the corner. 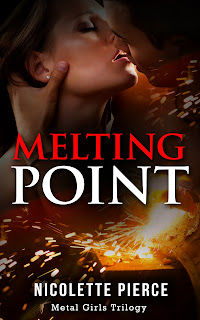 The Brenner family business had a secret. A secret that only Morgan Brenner knew. She was diligent to make sure it remained that way. She alone had followed in her father’s footsteps, knowing that if she was ever found out the repercussion would be terrible. But if she didn’t continue, the outcome would be deadly. To protect her grandfather, her sisters, and the family business, she continued, knowing that every day she stepped closer to ruin.
Liam Hayes had one mission: Infiltrate Brenner Metal Works and search for incriminating evidence. Because of his background in metal, he was the perfect choice. He thought it would be easy. Getting the grandfather to hire him was a snap. Then he met Morgan Brenner. She blocked him at every corner, making it clear he was not welcome. Quickly pegging her as the prime suspect, he made it his mission to discover her secrets.
Liam is determined to find out why Morgan is frequently called to Las Vegas and follows her, putting them both at risk. As events quickly unravel, Morgan finds her only chance of survival is to allow Liam in. But can she trust him? The only way to free themselves from the danger they face is by working together, something neither of them ever wanted.
http://www.nicolettepierce.com/books/melting-point/