THE CASE OF THE MEDDLING MAMA by Diane Burton 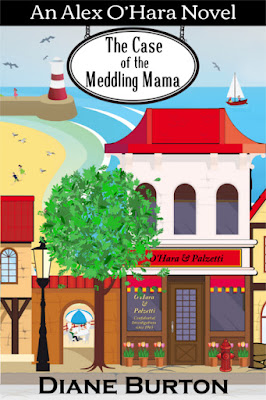 So Diane, when did you know you wanted to be a writer?

Diane:  In high school. My girlfriend and I wrote what’s now called fan fiction. Our stories were romances with the hero of our favorite shows and each of us was the heroine. They were fun until a teacher had me turn in and read aloud one of my stories. While the other students’ stories were about children and pets, mine was a romance. The teacher embarrassed me so much I didn’t write again until my kids were in high school. Still wrote romances, though.

Lexi: What are you most excited about in this new release?

Diane:  While the Alex O’Hara PI mysteries always have humor, this time she has to deal with drugs in high school. I wanted my readers to be aware of the dangers of prescription pain pills. A PSA on TV made a big impression on me—one where an adult is using the prescription for a broken leg (I think) and in the mirror is a teen taking the drug. That issue isn’t a big part of the story, but I hope it helps someone.

Lexi: What made you chose your title?

Diane:  When I wrote the first Alex O’Hara story, it was about finding a missing brother. I wanted alliteration in the title, so it became The Case of the Bygone Brother. The 2nd book is called The Case of the Fabulous Fiancé. This one, the 3rd, is The Case of the Meddling Mama. With Alex’s main squeeze Nick’s mother arrived at the end of the 2nd book, I had to reference her in the title.

Diane:   Jayne Ann Krentz and Janet Evanovich. Love the latter’s humor and the scrapes that Stephanie Plum gets into. With the former, I’ve read her books since the early 1980s. Her heroes are the strong and (somewhat) silent type, often misunderstood. The heroines are also strong. They don’t need rescuing and often do the rescuing. In the ‘80s, that wasn’t as common as it is today.

Diane:  Alex (Alexandra) is a woman in what many people consider a man’s job, being a private investigator. From the 1st story, she’s working to establish herself and prove that her father and his business partner did the right thing when they turned the agency over to her. She thinks she would’ve been a big, peasant woman in the Old Country capable of working in the fields. She is tall and also klutzy. That makes her endearing to me. I hope to the readers, too.

Nick is the strong, silent type. He came back to town for reasons beyond getting reacquainted with Alex. (Their dads were the business partners.) Alex had the biggest crush on him in high school. That crush turns into more. Although this isn’t romantic suspense, there's enough romance to satisfy the romantic.

Lexi: Diane, thank you so much for visiting us here at Happily Ever After Thoughts and for sharing an excerpt from your book. It sounds like so much fun :-)

Blurb:
Once again, Alex O’Hara is up to her ears in mysteries. After surviving an attempted murder, all she wants is R&R time with Nick Palzetti. But his mother leaving his father (“that horse’s patoot”) and moving in with Alex puts a crimp in their plans. Then Nick leaves on assignment and the teen she rescued from an abusive father believes his buddy is doing drugs. Meanwhile, Alex has two easy cases to take her mind off her shaky relationship with Nick—a philandering husband and a background check on a client’s boyfriend. Piece of cake.

Excerpt:
When two women entered the exclusive dress shop, Ellie left to greet them while her assistant chivvied me to put on the shoes. White socks, black strappy heels, and the gorgeous emerald green bridesmaid dress—I made such a fashion statement as I stood on the platform, call Vogue.
I so didn’t want to be there, especially when I recognized one of the women. I’d been the bearer of bad news to Nora Finley last week—her Mr. Perfect turned out to be a Black Widower. He and his cohorts had the perfect plan, a plan I thwarted just in time.
“Oh, you’re here,” Nora cried out when she spotted me and tugged on her companion’s wrist, practically dragging her over. “Ginnie, this is the PI that saved my life, Alex O’Hara!”
I cringed while heat bloomed in my cheeks.
Nora looked up at me saying, “I’ve been telling Ginnie here that she absolutely must hire you to check out her boyfriend—she met him on one of those online dating sites.”
Ginnie winced, like she wanted the floor to open up and swallow her—I knew the feeling. 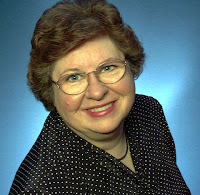 Diane Burton combines her love of mystery, adventure, science fiction and romance into writing romantic fiction. Besides the science fiction romance Switched and Outer Rim series, she is the author of One Red Shoe, a romantic suspense, and the Alex O’Hara PI mystery series. She is also a contributor to two anthologies: Portals, Volume 2 and How I Met My Husband. Diane and her husband live in West Michigan. They have two children and three grandchildren.
For more info and excerpts from her books, visit Diane’s website: http://www.dianeburton.com