New Release ~ IN THE WRONG SIGHTS by Tracy Brody 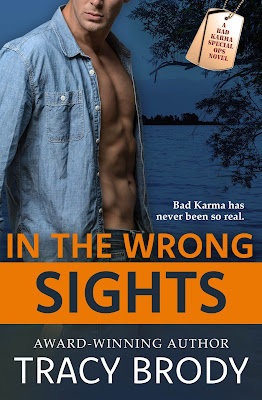 In the Wrong Sights

Cassidy O’Shea overheard what should have been a patient’s deathbed confession—except the cartel hitman lived. She’s lost two years of her life being in witness protection, but nothing will stop her from attending the funeral of Hal, her ex-stepfather and the only father figure she’s ever known. Except her quick trip to Fort Bragg is exactly what an assassin hoped for.

Learning his Special Ops mentor was murdered, AJ Rozanski’s suspicions turn to Hal’s mysterious stepdaughter who appeared at the funeral. He’s stunned to learn her testimony is needed to bring down the head of a major arms cartel. When the marshals request the Bad Karma team’s aid to persuade Cassidy to stay in the Witness Protection program, AJ is determined to convince her to do the right thing—and to find Hal’s killer. He’s supposed to be protecting her, not falling for a woman he may never see again.

A PAWN IN THE JUSTICE SYSTEM

An attempt on her life sends Cassidy to the only people she trusts—and back into AJ’s arms. His team sets a trap for the assassin who killed Hal, but that won’t end the threats to Cassidy and her family. The only way to escape spending her life in WITSEC is for the hitman she helped save to testify against the head of the arms cartel, except he’s not motivated to talk. Can she outlast and outwit him in a deadly game of survival?

The weight of the casket and lifeless body of Master Sergeant Hal Boswell matched the heaviness in AJ’s soul. If he hadn’t been the one to discover Hal, to press two shaky fingers to the cold flesh of his throat, he might not have accepted the death of his mentor.

A heart attack. AJ’s jaw locked recalling what the coroner had speculated. No way. It had to be something else. Hal was as fit as when he’d served on Special Forces teams. He’d endured multiple tours of duty. Survived too many dangerous missions to count. For him to die of a heart attack was like surviving a gunfight and then dying from the flu shot.

AJ wanted this to be a bad dream. Instead, he joined five other elite warriors—men Hal had molded into the best of the best—and moved toward the open grave. Even at eleven hundred hours, the heat and humidity of a cloudless North Carolina morning made sweat trickle from the rim of his dress uniform hat, down his neck, and under the crisp collar of his shirt. His white-gloved hand gripped the casket’s handle as he and the other pallbearers took short, precise steps. Steps closer to the void in AJ’s life left by Hal’s passing.

Had he done enough to show his appreciation while Hal was alive? There’d be no more weekend trips to Hal’s fishing cabin. No more wrangling over who caught the biggest trout. God, he hoped Hal had no doubt of his respect and the father-and-son type of bond that went beyond Hal’s mentoring.

The forty or so mourners seated were other lives Hal had touched: members of the Army’s Special Forces community; former teammates; members of the Selection cadre; men he mentored. All of them turned out in uniform to pay their respects.

However, there were no grieving widows at this funeral. Chief Lundgren contacted at least two of Hal’s ex-wives, but the few women among the group were wives attending with their husbands. No true family to hand the flag to.

A flash of movement to his left drew AJ’s gaze to the lone woman in running shorts and a T-shirt. Her long, lithe limbs churned, and her dark-red ponytail swung as she ran along the asphalt drive bordered by tall pines. Right toward them.

Protesters at military funerals usually had signs and typically didn’t come solo. Was she curious? Her questionable choice of locations aside, with its acres of white tombstones standing like rows of dominoes, why intrude on the one ceremony taking place?

Jeez, lady. Have some respect. 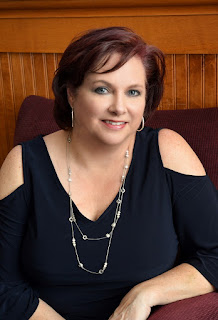 Tracy Brody has written a series of single-title romances featuring the Bad Karma Special Ops team whose love lives are as dangerous as their missions.  A SHOT WORTH TAKING and IN THE WRONG SIGHTS won the Golden Heart for romantic suspense in 2015 and 2016.  DEADLY AIM was a four-time finalist in the Golden Heart.

She has a background in banking, retired to become a domestic engineer, and aims to supplement her husband’s retirement using her overactive imagination.  Tracy began writing spec movie and TV scripts, however, when two friends gave her the same feedback on a script, saying that they’d love to see it as a book, she didn’t need to be hit over the head with a literal 2” x 4” to get the message.  She joined RSW and developed her craft and is still working on using commas correctly.

Tracy and her husband live in North Carolina.  She’s the proud mother of a daughter and son and now a mother-in-law.  She invokes her sense of humor while volunteering at the USO.  You may spot her dancing in the grocery store aisles or talking to herself as she plots books and scenes while walking in her neighborhood, the park, or at the beach on retreats with friends.

She has a free novelette, UNDERCOVER ANGEL, that is available exclusively to her newsletter subscribers -   https://www.tracybrody.com/newsletter-signup

Where to find me -