Interview with Erin Quinn and a Giveaway! 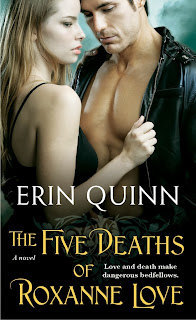 Alexis: Today we have award-winning paranormal romance author, Erin Quinn who is giving away an ecopy of THE FIVE DEATHS OF ROXANNE LOVE to one lucky commenter! Welcome Erin.

When did you know you wanted to be a writer?

Erin: I learned to read before Kindergarten.  I decided to be a writer somewhere between Green Eggs and Ham and Charlotte’s Web.

Alexis: Wow, that is young! What made you chose your title?

Erin: THE FIVE DEATHS OF ROXANNE LOVE is my most recent book and one of the few with a title that I chose (and got to keep).  Roxanne’s story is the anchor to my new series which continues next year with THE THREE FATES OF RYAN LOVE and THE SEVEN SINS OF RUBY LOVE.  I’ve always struggled to title my work, but with this series, the titles came first and they’ve driven the stories.  My original ideas changed over the course of writing them, but the titles kept me on track.  I wish I’d have more inspired moments like that, ha ha.

Erin: Here’s the recipe to my process.  1 part chaos, 1 part hope, 2 parts blood, sweat and tears.  Serve hot in the wee hours of the deadline morning.  Here’s a picture that pretty much says it all. 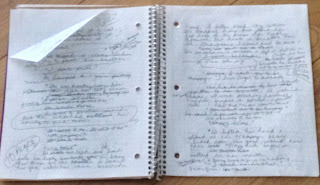 Alexis: Yikes! That sounds and looks a little stressful. What are you working on now?

Erin: I am finishing the final revisions of THE THREE FATES OF RYAN LOVE and making crazy notes on THE SEVEN SINS OF RUBY LOVE.  It’s an exciting time when I feel one story finally coming together and the other one starting to blossom.

Alexis: What are your favorite traits of the two main characters?

Erin: In THE FIVE DEATHS OF ROXANNE LOVE the hero and heroine are opposites.  He’s a reaper who’s come to earth to reap (once and for all) the woman who’s evaded him.  She’s a human who’s had three miraculous near-death experiences and is about to have her fourth.  Santo (the reaper) expects to come, take, go.  He confiscates the body of a police detective in the moments before he commits suicide and the instant he steps into Santo’s skin, the reaper begins to feel.  He never expected it and he doesn’t like it, but when his feelings involve Roxanne Love, he can’t resist them…or her.

Roxanne has been living in a fishbowl her entire life.  She and her twin brother are considered miracles by some, but not all.  The suspicions and accusations from cults and fanatics have made her withdraw until Santo enters her life and forces her to confront herself and life.

What I loved about writing these two was the layered conflict between them.  A woman who can’t die and the reaper meant to kill her.  A love that blooms out of control without a future.  Trust that neither one is prepared to give but must extend in order to survive.  All of those elements combined to infuse this story with emotion and conflict that I loved writing.

Alexis: This sounds like an awesome story! And you are an awesome lady :-) Thank you so much for spending time with us.

Check out this great excerpt from THE FIVE DEATHS OF ROXANNE LOVE:

The reaper—Santo—listened to the soft sounds of Roxanne disrobing. The whoosh of leather sliding down her arms as she peeled off his jacket. The rustle as she set it aside. She gave a sharp gasp after that. Had she pulled at her wound when she took off her shirt? Should he have helped her?

He pictured himself there, his dark fingers pushing the hem of her shirt up and over her breasts. They would be soft. He would be hard.

The faucet cranked on, followed by the metallic hiss of the shower curtain opening and closing again. The water sounded different when it hit her body. Welcoming. Beguiling. She’d be naked beneath it.

He ordered food for them both, so focused on the pitch of the spray that the desk clerk on the phone had to “sir” him twice to get a response. He finished speaking and hung up thinking about her skin, how smooth and slippery it might feel beneath his touch, his body a dark shadow against the whiteness of hers. 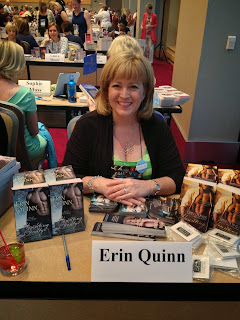 Alexis: Be sure to leave a comment for a chance to win this amazing book :-)