My Favorite Part of Writing the Black Opals

I lead a boring life.  No surprise really; most authors suffer from Hermit-Syndrome.  A few travel for research, a few meet uber-exciting people.  Nope!  Not me!  It’s just me, the two kids, and a bunch of chickens out here.

So for me, the Black Opal series is the perfect break from the monotony of being a farm-owned, egg-collecting, pig-training mom of two active boys.

I get to go to fancy places
Most of the Opal stories are set, or originate, in more-or-less exotic places.  Want to glimpse Russia?  Colombia? Colorado?  Even the Mid-East?  Oh, and there’s always Vegas and London too.  That’s at least six places in less than a year—and on an author’s salary to boot!

I get to safely experience danger

There’s a reason I have hens—when it comes to thrills, I’m pretty much a chicken.  But in the last thirty-six months, I’ve participated in car chases, gun battles, disarmed bombs, stripped, and even cozied up with a hit man or two.

Ah…the Romance
Farm life might have its own excitement, but let me tell you, the rooster’s the only one cooking up action around here.  In a short while I’ve cavorted with (one, two, three, four…ahem!) sinfully sexy covert agents.  Whoo boy.  They know how to really…um, treat… a girl.

Those are pretty much the top three enticements for me.  Beyond that though, there are friendships, laughter, shopping on occasion, and even strange family relations that can catch the unsuspecting off guard.  You never quite know what you’ll find in a Black Opal book.  But I can guarantee there will be danger, excitement, exotic places and uber-hot men.  If that sounds like it’s up your alley, give it a try!

And if you’d like to win a free digital copy, let me know below what draws you to covert agents, or secret operatives. 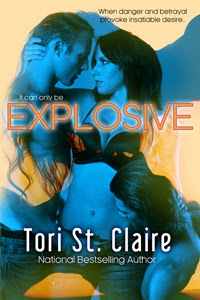 Jayce Honeycutt never imagined returning to his hometown for a wedding would find him confronting the woman he intended to marry.  Nor did he anticipate the passion they once knew would burn as hot and bright as ever.  Only now Alyssa’s involved with Jayce’s former best friend, and Jayce can’t bring himself to interfere.  When he learns Alyssa may be in danger, however, everything changes.  As the threats against her life escalate, Jayce will stop at nothing to unveil the secrets she’s hiding.  Even if it means risking his heart all over again.

A woman on the run…

Ten years ago, a brutal attack forced Alyssa Martin into a world of solitary darkness.  She threw herself into her career, but now her work has led her back into the nightmare of her past and thrust her into a deadly game. When her roommate employs Jayce for her protection, memories compound.  She’s never forgotten their shared desire, and her body still craves his masterful touch.  Yet Jayce is determined to break down her protective walls, and confiding in him is more frightening than the shadows stalking her.  But someone else is determined to control her.  To survive, Alyssa must trust in Jayce and bare herself completely.

Available in both print and digital formats:

National Bestselling author Tori St. Claire grew up writing. Hobby quickly turned into passion, and when she discovered the world of romance as a teen, poems and short stories gave way to full length novels with sexy heroes and heroines waiting to be swept off their feet. She wrote her first romance novel at seventeen.
While that manuscript gathered dust-bunnies beneath the bed, she went on to establish herself as a contemporary, and paranormal author under the pen name, Claire Ashgrove and writes historical romance as Sophia Garrett. Her writing, however, skirted a fine line between hot and steamy, and motivated by authors she admired, she pushed her boundaries and made the leap into erotica, using the darker side of human nature and on-the-edge suspense to drive grittier, sexier, stories.