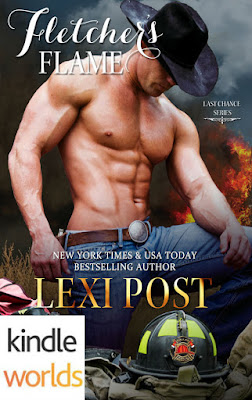 "A smokin`HOT firefighter with eyes only for you, an unknown danger, and undeniable passion that is all consuming, this is what it means to be Fletcher’s Flame." - Amazon Reviewer

Dana Wilson has one mission in life – to save animals. Thanks to her life’s calling, she’s developed a distrust of men in authority. So when Bo Fletcher, a cowboy firefighter, decides to appoint himself her bodyguard, her hackles rise.

Bo’s physical attraction to Dana Wilson has him digging deeper into her personality, a need to understand her burning in his gut. Unfortunately, that’s not the only thing burning. An arsonist appears to be nipping at Dana’s heels and Bo is determined to protect her.

As sparks fly between them, the fires come closer and closer to claiming Dana. Bo must make her see her own worth before they both go up in flames…literally.


Her body revved like an engine ready for the starting gun. Though she should feel embarrassed, she didn’t. Powerful was more the feeling though from the man before her, she should feel weaker than a day old kitten. She lifted her hand and made a circle with her finger. “Turn around. I need to see everything if I’m going to pass judgement.”
She saw more than heard his silent chuckle as he turned his back on her.
Shootin’ sheepherders! He was just as hot and tight in the ass as he was in the front. His back muscles rippled as he looked over his shoulder.
“Well?”
She swallowed hard, her belly doing flip-flops over the view of him. “You’ll do.”
He turned back around and closed the distance in one stride. “I’ll do?”
She forced her gaze up to meet his. “Yes.” She tried to grin, to lighten the mood, but the electrical attraction she felt wasn’t going anywhere.
“I’ll do for what?” He eyed her seriously, all traces of humor gone.
Good question. She didn’t have the answer. She couldn’t think with him so close, except about how much she wanted to touch his hard chest.
“I don’t know. I better go to bed.” She started to turn but his hand came down on her shoulder. 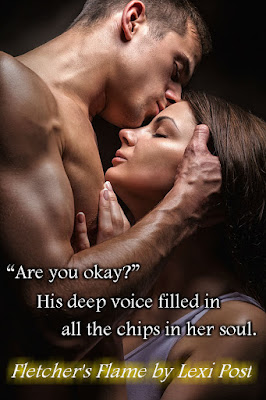 It wasn’t hurtful, just detaining, holding her there. “Dana.” His tone softened and her heart squeezed, a long buried need to be cared for rising up, yelling at her that this man could do it.
She stared at him, her hope fighting with her doubt. Why would he want to care for her? Her own parents fought over who would get custody, neither wanting her. Just because he was strong and caring didn’t mean he’d want her either.
His other hand cupped her cheek. “I like you. I find you fascinating, in a good way. Let me kiss you again.”
It was no more than a physical want, but at that moment, with all that was happening to her, she’d take it. She gave him the slightest nod possible, but she could sense his tension ease, even as he lowered his head and his lips touched hers.
Like at the fire station earlier, he was gentle, as if she were the most precious person in the world. Her cynical self crumbled as his tongue breeched her lips and explored her mouth. He tasted of mint, and he smelled so masculine, a combination of smoke and musk.

I hope you enjoy, Fletcher's Flame :-)