Hey, guys, good to see ya'all again. I sure hope life's been super fabulous to you lately!

So, what's new at this end is that I've been writing up a storm and I am sooo excited to tell you I have a new release coming out on the 18th of this month.  It will be coming out as a stand-alone, and it will also be part of a box set with 6 other stories by 6 other authors. Fun, huh?  I'm jazzed!  And I wanted to show you my new cover, which was designed by yours truly, and give you a little blurb about the story, as well as an excerpt.

It's a Christmas novella, continuing the escapades of fairy godmother, Delta Jane. 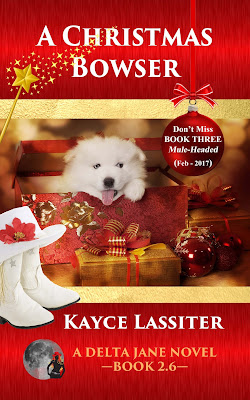 Kolton Holloway returns to his small home town in Wyoming, after the death of his mother, intending to unload an unprofitable strip mall. Unfortunately, the sale of the mall will force Harper Weston to close the doors of her wedding dress shop forever.  With these two at odds over the fate of the strip mall, Delta, has her hands full trying to make a love match between them.  Throw in a fairy godfather who thinks he’s a Christmas wedding planner, and Harper’s new puppy who is hell-bent on trashing her dress shop, and you have chaos of the highest magnitude.  Will Delta make this match in time to save the spirit of Harper’s unborn baby?  Or will the glimmer be lost forever?

I just got word that it has released earlier than expected, so here's the link to get your E-copy today!

It's a fun Christmas read that I think you will enjoy.  And if you don't already have the Delta Jane series, be sure you pick up your set now so you don't miss out on a single one of Delta Jane and Bubba Ray's adventures—and the cutest puppy ever!

Be sure you scroll down to read an excerpt from A Christmas Bowser.  Hope you love it.  That's my story, super and sassy, and I'm stickin' to it.  So hang on tight now, 'cuz we're gonna go real, real fast!

Her younger brother, Bubba Ray, was supposed to meet her here at nine.  She was exactly on time, and as usual, it appeared he would be late.  By now, she should be used to it.  After all, it was Bubba Ray.

I swear, that boy would be late for the last flight outta hell.

She waved her right hand as she sauntered around the back of the motorcycle, and the leopard print motorcycle helmet on her head morphed into a brown cowgirl hat with a leopard print hatband.

Delta grasped the handle to the front door of the café and stopped a moment to look around.  There weren’t many places in the west Delta hadn’t been, and Dubois, Wyoming was one of them.

She couldn’t believe she’d never been here before.  It was so cute, and so western—exactly her style.  The scenery on the way in from the Grand Tetons had been so stunning, she’d found herself contemplating the purchase of a small cabin, somewhere she could escape to, in between assignments.

Who the hell am I kidding?  I don’t have any time in between assignments.

She pulled the door to the restaurant open and started to step through when she heard the high-pitched whine of a motorcycle rounding the corner, about a half-block down from the restaurant.

Delta turned her head in time to see a three-wheel motorcycle that looked like a small pink Christmas sleigh with wheels pull into the parking lot, with Bubba Ray’s fat butt plopped right in the middle of the sleigh, dressed in a pink Santa suit.

“Aw, crap,” she muttered as she let the door swing shut and she strode toward the parking lot.

As Bubba Ray shut the engine down and climbed out of the sleigh, she stabbed her fists on her hips and glared.  “Bubba Ray, I thought you said you were going to get a car.”  She pointed at the sleigh.  “That ain’t no damn car.”

A huge grin split Bubba Ray’s face as he puffed out his chest.  “I looked at cars, but then I saw this.”  He pointed a chubby finger at the huge pink trike with a fully decorated Christmas tree, complete with twinkling lights, sticking out the top of the sleigh, between the back wheels.

He continued to grin like the village idiot as he added, “Now I don’t have to ride behind you when we go down the road together.”  He looked up and met her gaze.  “Isn’t it wonderful?  It’s so Christmassy. Don’t you just love Christmas?”

She stared at the ridiculous wheeled sleigh and clamped down on what she’d been about to say.  Instead, she mumbled, “I’m starting to love it less and less.”

Bubba Ray was clearly enamored with the damn thing, and she tried to make more of an effort these days not to hurt his feelings.  But she would have to find a way to nip the pink sleigh idea in the bud. If this got back to the fairy dimension, she’d never live it down.  Bad enough her brother always wore pink and carried a stupid pink gun.

She took a closer look at Bubba Ray.

Where is his damn gun?  I thought he slept with it on.

Instead of his usual pink cowboy hat and gun belt strapped around his hips, Bubba Ray wore a pink Santa suit with a pink hat trimmed in white fur.  Of course, the suit was tucked into dark pink cowboy boots.

“You decide to lose the gun?”
Bubba Ray shook his head and grinned.  “Nope.”  He reached into a pocket on the side of the Santa suit and pulled out his pink gun.  “I made the suit so the gun belt would be hidden inside it.  Didn’t think it would look right for Santa to walk around with a firearm strapped to his hip.”

Delta stared at him for a moment before she nodded.  “Yeah, I can see where that might be an issue.”  She struggled to suppress her next words when something painted on the side of his new ride caught her attention.

“Seriously?”  She pinned his gaze and pointed one finger at the sign as she stamped her foot.  “What the hell is that?”  Her gut churned and she could taste acid in the back of her throat, reminding her she was dangerously low on antacids—time to order another case.

He shifted his weight to the other foot as his gaze fell to the ground, and he stuffed his hands into the front pockets of his baggy pink pants.  “You said our cover here was to be wedding planners so we could connect with the client.”

She glared, her head beginning to pound as her blood pressure shot sky-high.  “I said that was our cover...one client, one wedding…no quotes for random strangers.”

The set of his jaw and his stance made it clear he really wanted this, and nothing she said would sway him.

She pulled in a deep breath as her emotions warred inside.  She was proud of him for standing up for what he wanted.  But part of her was sad that her baby brother was finally coming into his own, and part of her wanted to choke him over these stupid hair-brained ideas.  It happened more and more these days, giving her a new appreciation for parents whose children left the nest.

Her gut clenched.  Would Bubba Ray one day leave her?

She reached out with her mind in search of her boss, Call Montgomery.

Hey Boss, please tell me he ain’t goin' anywhere.  He’s my partner.  He needs me.

Call’s baritone reverberated inside her mind.  “Delta, he’s becoming his own man, and we’ll have to take whatever comes.  Merlin is working with the Creator on some plan they have for him.  I can’t see his future.  But whatever it is, it will be what’s best for him.  You do want that, right?”

She swallowed against the lump in her throat as she resisted screaming, “Hell no!”  Of course she wanted what was best for her brother.  She just didn’t trust that those in charge loved and understood him the way she did.  “I want him safe.”

The compassion was clear in Call’s voice in her head.  “He will be.”

Delta returned her attention to Bubba Ray, who watched her intently.  She was certain he could tell she’d been talking to the boss, but he didn’t interrupt the way he used to, just waited for her focus to return to the subject at hand.

Not trusting her voice to work past the lump still lodged in her throat, she motioned for Bubba Ray to follow, and she moved toward the front door of the restaurant.

As she reached for the handle once more, Delta looked toward the parking lot to see Bubba Ray struggling to hold onto a squirming white ball of fur as he lifted it out of the sleigh.

She pointed.  “That the dog for this assignment?”

Bubba Ray nodded, his head bobbling on his shoulders.  “Yep.  This time we got an adorable little puppy.”  He met Delta’s gaze as he held the wiggling Samoyed furball up next to his face.  “Isn’t she the cutest thing?”

Delta smiled.  “Yeah, she’s a doll.”  Then she shook her head and pulled open the door to the restaurant.  “I sure hope this one’s housebroke.”
Posted by Kayce Lassiter at 3:00 AM