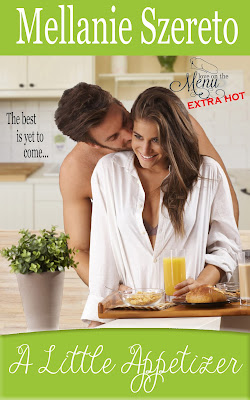 Lexi: Please welcome romance author Mellanie Szereto who has come with a giveaway!

Mellanie, when did you know you wanted to be a writer?

Mellanie: In fourth grade, I had to write an essay about what I wanted to be when I grew up. The writer in me liked poetry back then and I eventually switched to romance at forty. The other occupation I listed in the essay was teacher. Homeschooling my autism spectrum son for more than a decade was not as glamorous as my fourth-grade self thought teaching would be.

Mellanie: I always have a long list of books to write and often work on 2-3 stories at a time. The Main Dish (next up in the Love on the Menu...Extra Hot series), the first book in a paranormal trilogy, and the second book in a nerd romance series are taking turns right now. While I finish writing Ginger’s and Mason’s foodie romance, I’ll be adding to my research for the cursed shifters books by visiting some of my favorite hiking spots in Ohio and refreshing my memory about my nerds by rereading what I’ve written so far on Eli’s and Trixie’s story.

Lexi: Why did you choose this sub-genre of romance?

Mellanie: For the most part, I’m a pantser. I’ve tried plotting, but the story never follows my plan. Ideas pop into my head when I’m in the shower, driving, and waking up in the morning. The characters may be fully developed or I may have only a very basic plot (opening, conflict, happy ending). Once I start writing, the names of the characters seem to happen without a lot of thought and they guide me through the story. I set up a timeline to track major events and keep a list of characters, important locations, and other details I may need while writing. I also prefer to edit as I go. When I finish, the manuscript usually needs a few minor tweaks before I send it off to my critique partner and editor!

Lexi: What do you think everyone should know about your husband?

Mellanie: My husband is a true romantic. He would much rather go hiking, kayaking, or shopping with me than hang out with the guys. He sends me sweet text messages and loves to cuddle. When we were dating, he gave me a square of notebook paper with a slit torn in the middle as my first engagement ring.

Lexi: Thank you, Mellanie for visiting with us.

Mellanie is giving away a copy of A Little Appetizer to one lucky commenter. Just answer her question. Good Luck!

QUESTION: I can my own barbecue sauce with tomatoes and peppers from my garden. What’s your favorite kind of barbecue?

A Little Appetizer Blurb:
Restaurateur Nash Granger wouldn’t mind being happily married—if a woman would let him tend to his growing business instead of making babies. When a call for custom cabinets turns into phone sex, he’s ready to give dating another chance.

Carpenter Lucie Reiter likes her food and her men hot and spicy, but a helping of the safest kind of sex is the perfect appetizer to take the edge off her hunger. When she discovers her partner is the renowned barbecue master she crowned King of the Grill, she’s ready to take their association to a more personal level.

But Nash’s plan to boost his finances with one more cook-off leaves Lucie with a tough decision—step down from judging or brush off the man who always puts business first.


Excerpt from A Little Appetizer:
Nash stood bathed in candlelight next to the oversized tub, his boxers at his feet. Frothy suds glimmered in the flickering glow of the flame. “I can turn on some music if you want.”
Lucie accepted his offered hand as she stepped into the bath. A blanket of warmth surrounded her calves and amaretto-scented bubbles popped against her knees. “Nah. I had to listen to country music all afternoon. Songs about cheating, dogs dying, and drinking because of cheating and dogs dying. Oh, and pickup trucks.”
“Not a fan, either. I was thinking more along the lines of some jazz. Miles Davis, Tony Bennet, Ella Fitzgerald.”
“Now you’re talking. Of course, if I didn’t know better, I’d say you’re trying to seduce me.”
“Ah, but do you know better?” He tapped a couple buttons on the intercom console above the towel rack and then sank into the water beside her. Strains of muffled saxophone added a hushed layer to the soothing mood. Before she could answer, he lifted her into the space between his legs. “Seduction doesn’t have to be about sex.”
“He says as he positions his cock against her ass.”
“That’s cuddling, not an invitation or an insinuation. I’m pretty sure I’m going to need more than fifteen minutes to recover this time.” He scooped another spoonful of dessert. “You better help if you don’t want ice cream all over your face.”
“What kind of seduction is this?” Taking his advice, she guided the spoon to her mouth.
He took a bite of his own, but a slow, honest answer beat a fast lie. “One where you see that I like being with you, that we make a good couple.”
Something in the careful choice of his words suggested he wanted to say more. The possibility that he might not want to jinx their chances was understandable. She couldn’t blame him for taking a step back after his earlier admission. They’d spent a lot more time talking on the phone and by texting than they had in person. Then again, he might have been trying to lead her in the other direction.
His answer hadn’t clarified anything. Was he thinking about marriage already?
She accepted another bite, thankful for a few moments to contemplate a response. Settling against his chest, she closed her eyes and focused on the beat of his heart, the relaxing warmth of the water, and the taste of chocolate and cream. “Yeah, we do.”
The next move was his.

When her fingers aren't attached to her keyboard, Mellanie Szereto enjoys hiking, Pilates, cooking, gardening, and researching for her stories. Many times, the research partners with her other hobbies, taking her from the Hocking Hills region in Ohio to the Colorado Rockies or the Adirondacks of New York. Sometimes, the trip is no farther than her garden for ingredients and her kitchen to test recipes for her latest steamy tale. Mellanie makes her home in rural Indiana with her husband of thirty years and their son. She is a member of Romance Writers of America, Indiana Romance Writers of America, Contemporary Romance Writers, and Fantasy, Futuristic, and Paranormal Romance Writers.


Lexi: Don't forget to answer Mellanie's question for a chance to win A Little Appetizer :-)
Posted by Lexi Post at 7:00 AM