Betty Bolte and A HAUNTED MELODY 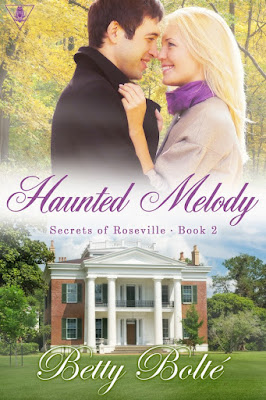 Thanks so much for having me stop by today to share my new release, Haunted Melody (Secrets of Roseville Book 2)! Set in a haunted plantation in southern Tennessee, this story was such a fun one to write and I hope you’ll enjoy reading.

Music has played a large part in my life, more so in school than after. I played a viola beginning in the third grade and through to community college and community orchestras as an adult. I also sang in the church and high school choirs, and marched in the band in the flag squad. To this day, I love to sing and still own a guitar, which I really need to start playing again. I miss making music! Hopefully after my hubby and I move next month, I’ll be able to find the time to play again.

When I started writing Haunted Melody, I was happy to discover that my heroine Paulette and I share one thing in common: we both react to situations by thinking of songs. Music is an important part of Paulette’s life, one she’s shunted to one side until necessity brings it back to the fore. Only after Zak arrives in Roseville does she find her voice again.

As a result, when she gets into her car to start driving, she hums “On the Road Again.” Sounds very familiar! With that in mind, I thought I’d share the playlist (linked to Spotify) from Paulette’s story, Haunted Melody, in the order in which they appear:

I love the blend of ballad and musicals in this list. Some of my favorite singers and groups are included, especially John Denver and the Eagles. But who doesn’t like Gene Kelly and Debbie Reynolds in Singin’ in the Rain?

In reviewing this list, it occurred to me that the song titles actually mirror the emotional journey that Paulette finds herself making. Very interesting! I didn’t select them to do that on purpose, but it works.

Do you have a go-to song that pops into your mind in certain situations? Or if you did, what would it be?

Thanks again for inviting me! Please feel free to connect with me at any of the social media sites below. I love to hear from my readers! I hope you enjoy Haunted Melody!

Paulette O’Connell needs to build her home decorating business in order to give her unborn child a stable home. While exploring the mysterious attic of the antebellum plantation where she lives, she accidentally summons her grandfather’s ghost. But he won’t leave until she figures out why she needed him in the first place, putting her plans in serious jeopardy.

Zak Markel has been searching for the last ingredient to create the Elixir of Life he hopes will save his brother’s eyesight. But he discovers the woman of his dreams in the smart and beautiful Paulette, distracting him from his focus at the worst possible time, even though she staunchly refuses to allow him past her defenses.
Can he convince Paulette to open her mind to possibilities and follow her heart to true happiness before it’s too late?

The enormous orange jack-o-lantern faced the long driveway, challenging visitors to Twin Oaks with its glowing toothy grin. Paulette O’Connell propped her fists on her hips and assessed the rest of the decorations gathered on the wide front porch of her younger sister Meredith’s antebellum plantation home. Gratitude and disquiet filled her chest along with the crisp fall air. Standing at the bottom of the three brick steps, she scanned the clusters of corn stalks propped against the two center columns, the gourds and pumpkins scattered about, and the wisps of fake spiderweb stretched between two of the large white columns. A forbidding black spider waited among the gossamer strands. A white sheet ghost danced in the brisk breeze, rattling the dried corn stalk leaves. With a chuckle, she clapped her hands together. “Perfect. Mer will love it.”
Their next B&B guests might include several young children who would love the spooky yet fun décor as much as she did. If only trick-or-treaters in town came out to the country. But of course, the trek to Twin Oaks wouldn’t yield enough return on investment for the children’s parents to make such a journey. The memory of Halloween parties from her childhood made her smile. Costumes. Games. Telling tales and singing songs about monsters and spooky things. They needed a reason to venture so far from town. Perhaps she could lure them to the plantation with some form of entertainment. Hmmm.
Halloween remained her favorite holiday, at least for the fun props. Ever since discovering she possessed the ability to see ghosts a few months before, the approaching holiday had taken on new meaning. She had grown up with “dreams” about a lady in a blue gown. Who knew she was actually a ghost, her Great-great-great-aunt Grace. Later, she learned from Meredith that Grace’s brother, Great-great-great-grandfather Joe, also hung around the family cemetery, apparently waiting for his sister’s return. Meredith had figured out the identities of the ghosts, but the sisters realized they possessed the ability to see ghosts at the same time.
Thankfully, the ghosts weren’t scary so much as sad and a little spooky. After burying Grace’s remains beside Joe’s, the house held no more spirits, as they finally rested in peace. Knowing the plantation no longer hosted spooks made enjoying the tricks and treats of the season more fun. Although she rather missed Grace’s friendly presence in a gorgeous blue dress replete with sparkling sequins, a dress which had inspired Paulette’s own childhood designs.
Rubbing a hand over her protruding belly, she lingered in the fading afternoon light. She surveyed the expanse of pale grass reaching toward the distant road winding past. The glittering water of the fenced lake where ducks paddled about. Low clouds covered the sky, obscuring the sun. Several trees sported jagged trunks, remnants of the tornado they’d survived six months ago. Hunkered in the storm shelter within the stone foundation of Twin Oaks, she’d feared the destruction of the plantation once and for all. Thankfully, they’d suffered only minor damage, except for the old gazebo. Rebuilding it had been Meredith’s first priority. Its new design proved very popular with the guests, who frequently enjoyed its shady quiet on a hot summer afternoon, or the soft lighting in the evening.
The baby shifted, a tiny foot or perhaps a fist bopping her hand where it rested. “Soon, little one. Another six weeks, give or take, and we’ll meet properly.”
Tires crunched on gravel and she recognized her sister’s glaring yellow Camaro approaching. The sports car shouted its owner’s status. Successful. Independent. Confident. All the attributes Paulette wished she could ascribe to herself.

Betty Bolté writes both historical and contemporary stories featuring strong, loving women and brave, compassionate men. No matter whether the stories are set in the past or the present, she loves to include a touch of the paranormal. In addition to her romantic fiction, she’s the author of several nonfiction books and earned a Master’s in English in 2008. She is a member of Romance Writers of America, the Historical Novel Society, the Women’s Fiction Writers Association, and the Authors Guild. Get to know her at www.bettybolte.com.