I was waiting for this release. I cleared my schedule so that I could read and review it. I downloaded it even. Then life happened. Sigh. Now my window into the romantic adventures of Laird and Lass has been bumped to next weekend. However, since I absolutely love Eliza Knight's novels, I feel confident that this one will be just as great. I mean, it even has a ghost so it must be good! Lol. I did chuckle though, and it's probably just me. But the muscle-bound man on the cover is the hero named Beiste. I'm ignorant as to the correct pronunciation, so for reading, in my mind, it will be "Beastie". No one is allowed to correct me because he is now and forever Beastie. He does have a little resemblance to one, after all <wink>. 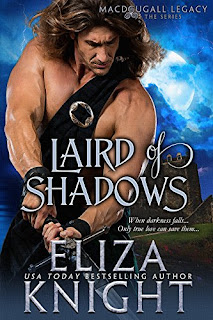 Beiste MacDougall has only just found himself as laird of his clan after a brutal attack from Vikings leaves his father slain. On the night of his sire’s death, a beautiful woman comes to his castle begging for help, calling upon a vow their clans had made years before. Though he’d rather wallow in his pain, Beiste is tempted by the lass, the secrets she holds, and the chance at retribution she brings.

Lady Elle Cam’béal is desperate to save her brother and her clan from the vile clutches of her Viking enemies. But there is only one man who can help her, a handsome, provocative laird with a beastly temper. When he locks her in a chamber, she is visited by an apparition, and left with a secret that changes her destiny. Elle must figure out a way to accept her fate, but also forge a future of her own choosing.

As battles and treachery rain down upon them, Beiste and Elle find unlikely allies in each other, and a few stolen moments of passion that bring light from the shadows…

A much smaller, novella-length version of this story appeared originally in the Once Upon a Haunted Castle anthology. This extended version is twice the original size!

Check it out on Amazon!

Next month I will have a new release to announce and hopefully a video to accompany it.

Until then, be happy!