AS YOU WERE, COWBOY by Heather Long Released! 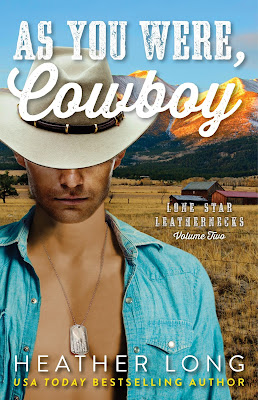 As You Were, Cowboy

Mission: Rebuild his life following medical discharge from the Marines after suffering a spinal injury. Care for and train his beloved horses once again.

Obstacle: Claire Windsor. The London-born trainer comes to the ranch, keen on beginning a training program designed to turn its horses into therapy animals. The last thing Mateo wants is a change in routine or a beautiful, talented woman with a sexy accent telling him what to do. But avoiding her may prove impossible, especially when she stands between him and the work he loves.

Series Reading Order:
Semper Fi Cowboy
As You Were, Cowboy

Excerpt of As You Were Cowboy by Heather Long:

Anger filled Mateo Lopez like hot shrapnel bursting with every word the gorgeous blonde issued in her cultured British accent. White-hot lances of pain radiated along his spine. All he’d done was move a few damn bales of hay, and it had left him sweating and gasping for breath. Accepting his limitations and giving in to weakness were not in his wheelhouse, although he’d elected to make the walk to his truck for the prescription the doctor insisted he fill. If he could avoid taking the pain pills he would. Now her.


“I beg your pardon,” she said, and he could practically feel the stiffness of her tone, as though a riding crop were delivering a fresh welt of pain across his back. “Mr. Wilks?”


“I’m not Tanner,” Mateo admitted. As grating as her pronouncement had been, his mother would tear a strip off his hide if he didn’t dispel the misunderstanding. “I’m Mateo Lopez, ranch manager.” Technically, he was the assistant ranch manager to his father. They split the ranch tasks between them. “I handle the trainers as well.”


He was the trainer.


The horses were his.


This . . . woman was not going to just walk in and take over like she owned the place.


“Please accept my apologies, Mr. Lopez. I thought you were Mr. Wilks.” Unease left her manner stilted, and a tiny frown line appeared between her cornflower-blue eyes, which gleamed with intensity even in the barn’s shade. Sugar nickered again and stomped her feet, disturbed by their nearness and likely offended by the lack of attention. The filly was lovely, and a diva in her awareness of it.


With a light cough to clear her throat, she recaptured his attention and continued, “If you could point me in Tanner’s direction, then I’ll excuse myself.”


“I have no problems excusing you, but the ranch is private property and, as I already stated, I oversee all the horses here. We don’t need a new trainer.” It went against the grain on every level. A spasm worked its way along his spine, and he gritted his teeth. Yes, Tanner had mentioned the potential plan—keyword potential. He hadn’t mentioned actually hiring anyone. Mateo attributed it to keeping the Colonel focused on his recovery. That was why, right?


“Mr. Lopez, I’m not sure what I’ve done to offend you, but my contract is with Mr. Wilks.” The stress of the word contract couldn’t be missed, nor could the way her chin lifted and her shoulders went back. Even her nose seemed a little higher, as though she physically held herself back from fighting with him.


“Lady, I don’t know what you think is going to happen, but no trainers touch these horses without my approval.” The horses were everything to him. There was no way Tanner was going to usurp his work to bring a Brit.


“I know exactly what is going to happen. I left a very lucrative and successful training program in Stafford to travel several thousand miles to make a dream come true. I apologize if I’ve offended you, but until Mr. Wilks decides to buy out my contract, I’m not going anywhere.” Stubborn defiance flashed in those willful eyes. Red flushed her cream complexion, which drew his attention to the scatter of freckles across her nose and upper cheeks. They contrasted against her sharp look, and he couldn’t look away.


“What you left or didn’t leave is not my concern,” he said through his teeth. The spasm in his back was continuing to lash at his spine like blazing hot barbed wire. The need to collapse weighed on him, but he refused to give in. Not when he faced an opponent in better physical condition than he. Even if she was overdressed for the heat. To give in to weakness in front of her would be to concede that he couldn’t do his job.


Despite the rigidity of her posture, she couldn’t disguise the concern flickering in her eyes. The last thing he wanted was her sympathy. Not when she stood there with clenched fists. “I’ll leave you to whatever it is you’re doing and seek Tanner out myself.”


Though she turned on her heel and began walking away, Mateo couldn’t just let Claire leave.


“You have no business wandering around the ranch by yourself.” Not dressed like she was—she’d get heatstroke. “The ranch covers several hundred acres, and that doesn’t include the outer pastures.”


Halting, she still held her hands clenched tight as she turned to face him. “Mr. Lopez, was it?”


A shiver of humor evaded the pain storming his system. There was something about the way she framed his name in her perfectly sensible, clipped accent. Melodic and insulting all at once.


“You can call me Mateo.” He managed a smile, though it required him to clench his teeth.


“I’d prefer to keep the address formal in order to stay professional.” The brilliant blue of her eyes turned positively frosty. “That being said, Mr. Lopez, I spoke to a Maria. She directed me to the house, and I chose to stop at the barn on my way there. My mistake. I won’t continue to trouble you.”


The fingers of agony digging into his spine began to twist, and Mateo braced a hand against the door to the stall. White-knuckling, he managed to stay on his feet. A man appeared in the entry to the barn, backlit by the late-day sun, the hat on his head giving away his identity.


“Miss Windsor,” Tanner called as he strode down the aisle. “Maria told me you were here. Was on the way to the house when I saw the car outside.”


Shit. Mateo wanted to curse. Bad enough the foreigner was here. His best friend confirming her story, though—that made it all the worse.

From paranormal historical westerns to contemporary military romance, Heather might switch genres, but one thing is true in all of her stories—her characters drive the books. When she’s not wrangling her menagerie of animals, she devotes her time to family and friends she considers family.

She believes if you like your heroes so real you could lick the grit off their chest, and your heroines so likable, you’re sure you’ve been friends with women just like them, you’ll enjoy her worlds as much as she does.

Heather's other fantasy romance series include the paranormal westerns Fevered Hearts starting with Marshal of Hel Dorado, Black Hill Wolves which start with What a Wolf Wants, Witches of Mane Street, Mongrels, and the forthcoming Bravo Team WOLF series.