MERRY CHRISTMAS ONE AND ALL!!!

Hey gang, good morning!  I hope everyone is having a ball and enjoying their holiday season.  The lights, the music, 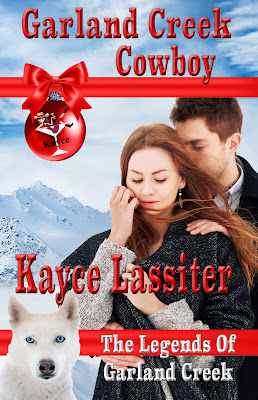 the occasional heartwarming news stories all have me loving the holidays right now.  So I had to rush to get my single out and give ya'all one more way to share my love of Christmas.

If you love Christmas too, check out Garland Creek Cowboy.  It's a heartwarming tale of second chances brought about by the magic of Christmas. And for those of you who love dogs, this one features a gorgeous, magical blue-eyed husky.  You'll love Eishund!

This story came out initially a couple of weeks ago as part of a box set from the Butterscotch Martini Girls, so if you missed that announcement and love box sets, use the link  below to get four sweet Christmas stories at a seriously discounted seasonal price.

Just to give you a little bit of a taste of Garland Creek Cowboy, here's an excerpt.  Enjoy!

The band started into a two-step, and he spun her slowly onto the floor. She looked terrified—a look he’d never seen on her before. He suspected it had nothing to do with dancing, but he took care to go slow and put her at ease as he two-stepped her around the floor.

After a few steps, he felt her relax in his arms. “I’m going to turn you.”

She tensed, but didn’t object as he spun her into a slow, smooth rotation. Before they’d even made a full rotation around the floor, she was moving like she had back in high school. So, he stepped it up, sending her into two and three spins at a time. By the end of the song, she was laughing and having fun with it. So was he.

His throat tightened as the old feelings stole over him. Would he ever be able to dance with this woman without wanting her?

The band didn’t stop between songs, but moved from the first two-step straight into another, calling for everyone to grab a partner and make their way onto the dance floor.  Within moments, the floor was filled with two-steppers, ranging from beginners to experts.

Melayna seemed to relax even more when she was surrounded by dancers, and she really started to get into it, swishing her skirt, and kicking. She was bold and beautiful, and he couldn’t take his eyes off her as he moved in time with her, making sure he never missed a beat or a catch.

When the band moved from the second two-step into a slow song, Devin didn’t ask. He just pulled her into his arms. She snuggled in like they’d never missed a dance in fifteen years, but he suspected it was just instinct. Because a couple of steps in, he felt her tense in his arms.

She made a feeble attempt to put distance between them. He budged slightly to let her know she wasn’t trapped, but didn’t give her a whole lot of free rein. Fortunately, she didn’t balk, and stayed where she was. By the end of the dance, she had relaxed into his arms again.

He tried to just savor the moment, and not think about what-ifs or woulda-coulda-shouldas. He allowed himself the luxury of just being in the moment with the girl he’d loved for more than half his life.

When the song ended, he loosened his hold reluctantly, staring down into her face as she tilted her chin up to smile at him.

A rush of desire slammed into him so hard he clenched his jaw to maintain control over his body and keep from doing something stupid. It would be so easy to just lower his head and kiss her right now.

She hadn’t pulled away yet.

He was trapped in the depth of her dark eyes, like helpless prey caught in a snare.

She tipped her head to the side. “Thank you, Devin. You were right. I enjoyed it tremendously.”

His brain screamed, “Kiss her,” even as she stepped out of his embrace.

Too late. I should have.

He kicked himself. He may just have made the most fatal mistake of his life. He almost reached for her again, but she turned away before he could make his arms move.

He watched her walk away.

He had no intention of ever leaving Garland Creek, and she’d made it perfectly clear fifteen years ago that she had no desire to stay in Garland Creek.  He wished things could be different.

She’d always been the girl of his dreams, except for the one little detail fate had thrown between them—she wanted to wander, to see the world with no ties, and he needed the ties that bound him to his roots.

As Melayna danced with Devin, she was reminded of how wonderful they had been together back in high school. He’d always been so easy to follow, each of them always knowing exactly what the other was going to do next.  Never any surprises or embarrassing moments, always perfect and fun.

For a moment, she managed to forget she’d fled town like her ass was on fire, that she’d been filled with the fear he would squelch her dream. She’d always known he would never intentionally do it, but her love for him had been so all-consuming and overwhelming that she hadn’t managed it well.

She’d been unable to stand her ground and make sure he knew what she wanted. She’d told him, but hadn’t had the confidence to make it a non-negotiable item.

She now realized her youth and inexperience had driven her to turn it into a deal-breaker. She’d chosen for Devin, never giving him a chance to decide for himself. She wondered now what direction he would have taken.

Given the chance to do it all over again, what would I choose today?
is
Devin had a daughter now, as well as full responsibility for the family ranch and for the Founders Association. His roots had done nothing but strengthen and deepen, while hers had run wide and shallow. She wondered if he would even consider being with a woman who was always gone to one livestock event or another.

Pain clutched her heart and squeezed as she realized he now had a family. He should be looking for a mother for Parker, not another woman who would flee overseas, leaving her family behind at home.

Another chance was something she had no right to even ask for if she wasn’t willing to make some changes in her own life.

She didn’t know the answer. Her breath hitched in her chest at the thought that she might actually have to walk away from Devin for a second time. Did she have the strength to do it twice?

GET YOUR COPY NOW


Another option to purchase this story--if you love box sets--is with the Butterscotch Martini Girls Christmas in Garland Creek set.

Kayce
Posted by Kayce Lassiter at 11:51 AM