Hey, gang, the Butterscotch Martini Girls have a new release out TODAY!  Check it out... 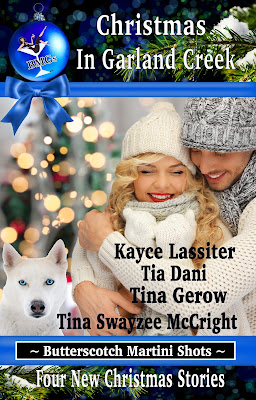 Four brand spanking new Christmas stories to warm your heart by four of the BMGs -- Tia Dani, Tina Gerow, Tina Swayzee McCright, and yours truly...all for only 99 cents!  It just don't get no better than that.

Get your copy today at any of your favorite outlets.

Devin Douglas finds his world turned upside down when his high school flame returns to town for Christmas after a sixteen-year absence. Melayna Gaines had turned down Devin’s marriage proposal and fled town like her tail was on fire. Now she’s back and the two must work together to save Devin’s fifteen-year-old daughter who has fallen off a cliff and is stuck at the bottom of a canyon with a mountain lion and a broken ankle. Can Melayna put aside her dreams of international travel to stay in Garland Creek with Devin? Is she prepared to take on another woman’s teenage daughter? Is Devin destined to pick up the pieces of another devastating rejection? Or will the magic of Christmas in Garland Creek give these two star-crossed lovers a second chance at love?

Her Christmas Wish by Tia Dani
There’s Christmas magic in Garland Creek and it comes from more than just the holiday season. Disillusioned with her life, architect, Kandee Harding, accepts an interview in Garland Creek, Arizona for a lucrative position with Anderson Holdings. Unbeknownst to her, there’s more coming than a career move. Sam Ralston, a restaurant supply owner, arrives at the same time to fix a problem at a newly-opened resort. Soon they become involved in a scheme of payback, a discovery of the past, and a deadly sabotage lurking behind the Christmas Spirit.

Mom for Christmas by Tina Gerow
Brock Turner doesn’t believe the holiday magic of the tiny town of Garland Creek can grant his Christmas wish, but fate works in mysterious ways. Brock’s wish is to have his mom with him through the holidays. However, she tragically loses her battle to cancer just days before Christmas... But not before she tells him he’s adopted. Her wish is for Brock to find his birth mother, and he promises he will do everything he can. Nurse Anastasia Callahan has been a Christmas angel to Brock as she helped ease his mother’s pain during her last days. Now Anastasia and Brock must work together to answer his mother’s dying wish and locate the birth mother he never knew. Brock and Anastasia grow ever closer as the holiday magic of Garland Creek weaves its spell and just might grant his wish in a strange and mysterious way.

Walking Away With Christmas by Tina Swayzee McCright
When a string of burglaries threatens to close the newly opened Garland Creek Resort, Gina Ferari, the resort photographer, discovers her aunt is the prime suspect. After a chance meeting, Gina finds an ally, and possibly more, in Carter Hayes, a visiting lawyer. But the situation worsens when an employee disappears, Carter’s future with his law firm becomes questionable, and Gina can’t get beyond her childhood loss to learn to trust again. Can a touch of magic bring back Christmas and Gina’s happily ever after?

Myca slipped by the pair. “Come on, Colleen, it appears the bar is now open. “Let’s give it a whirl.”
Colleen followed her to the bar, where Myca ordered, “Two butterscotch martinis, please.”
The silver-haired bartender in starched Wranglers, a black jacket, and a red vest with a bolo tie, smiled. “Okay, ladies, but I’m just a volunteer. I don’t do this for a living.”
Myca smiled. “Seriously, Ben Monroe? We’ve known you since we were all kids together. We know who you are and what you do for a living.”
He winked. “Then you know I have no clue how to make a butterscotch martini. But tell me what’s in it,” he leaned forward flirtatiously, “and I’ll try anything for you, Myca.”
She froze and cut her gaze to the side to stare at him, then to Colleen, who gawked at Ben like he’d just pissed on the floor.
Myca put one hand on her hip. “Are you flirting with me?” She’d discovered a long time ago that the direct approach either made a guy back off, or made him even more determined. She wasn’t sure which option she hoped Ben would take. She’d decide how she felt about it after she saw which way he jumped.
Ben straightened and held her gaze as he announced, “I’ve been flirting with you since you were sixteen years old. It’s about time you noticed.”
Huh, really didn’t expect him to jump that way.
The only thing she could think to say was, “Well, let’s see how good you are at bartending. That might make up my mind.”
Then she turned to Colleen and growled, “You can close your mouth now.”
Colleen snapped her jaw shut, but continued to stare.
He picked up the drink shaker. “Shoot.”
Myca stepped forward and leaned on the bar. “Okay, four jiggers of Buttershots, four jiggers of Bailey’s, and two jiggers of vanilla vodka.”
He tipped his head to the side. “That’s ten shots of booze.  How many martinis am I making.”
Myca scowled at him. “You are making two martinis.” She extended her hand across the bar and pointed to the shelf below. “And you’re going to use the two large martini glasses I put down there earlier.”
He raised a brow, but said nothing, simply reaching for the martini glasses, which were much larger than the glasses the resort had provided.
Ben smiled. “Maybe I should join you,” he teased as he poured the shots.
Myca glanced up at him. “If you’re going to join us, you’d better put more booze in the shaker.”
Ben Monroe laughed as he dumped in some ice, shook the container, and poured two very full martinis. He slid them across the bar. “Enjoy, ladies.” Then he leaned close and lowered his voice as he addressed Myca. “And be sure you come back and see me when you’ve finished that drink.”
She could feel her face heat, as she shot back a snappy retort. “Of course, we’ll be back. This is only our first drink.”
* * *

Devin watched as his grandmother and Melayna’s turned away from the bar. “You suppose those two will stay sober tonight?”
Melayna laughed. “Not a chance.” She pointed at them. “Those glasses are way full.”
He groaned, then met her gaze. “I recognize those drinks. They’re butterscotch martinis, and they are all alcohol.” He shifted his gaze back to the grandmothers. “And it would appear they have brought their own glasses, which are twice the size of the martini glasses the hotel provided.”
Melayna snorted. She covered her mouth with her hand. “Sorry. I’m just picturing the two of them fighting over a toilet to puke in.”
“Oh, let’s don’t go there. I don’t even want to think about that.”

GET YOUR COPY TODAY

(Watch for the print version, which will be available at Amazon within the next few days.)

(Also available at other online retailers.)