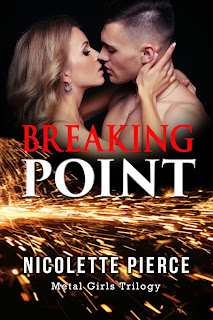 Reed Taylor had been hit before. As an ex-FBI agent, he had even been shot before. But nothing prepared him for the honey-haired, denim-eyed devil who stormed over to him wearing nothing but a dripping-wet bikini, followed by six pudgy piglets.
“Reed, you jerk!”
A right-hook swing had his head whipping to the side. He cursed, holding his jaw from the blow.
He glared at Greer Brennan. “What was that for?”
“You know damn well what it was for,” she snapped.
“I take it you’re still mad.”
“Mad? I’m furious!”
It had been a full year since he’d seen her last. He thought for sure she’d have cooled off by now.
The piglets raced around his ankles, thinking nothing of the altercation, then they tore off to the lake, splashing and grunting.
“What’s with the pigs?” Reed asked . . . Continue the story and find out what happens next. It will be a bumpy, thrilling adventure full of sparks.

Get my copy of Breaking Point!