Hey gang, I just wanted to stick my head in and give ya’all a cyber hug.  Hope everyone is doing great out there—all healthy, happy, and gettin’ stuff done.  LOL 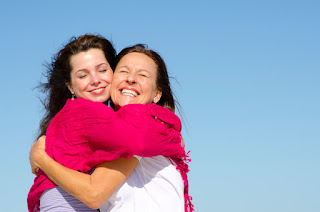 At this end, it’s been a bit of a rough month.  My mother ended up in the hospital for a couple of days with pneumonia. From there, she went to an acute rehab facility, then on to a non-acute facility. Now she’s being released tomorrow, and she is excited that she’s getting a new apartment in a senior living community. I am too! So, all the frustration and hard work was worth it.

So, let’s chat a bit about this. We delayed taking this step because mom was afraid of losing her independence. I suspected if she ever gave it a try, she’d love it because she is one of the most social people I’ve ever seen.

That said, mom has had a chance to try the senior living lifestyle on for size while she’s been there for non-acute rehab…and…wait for it…drumroll…SHE LOVES IT! They have bingo and bunko and scrabble and movies and old men to look at. Think I’m kidding? Uh…no. Which is what I told her…uh…no! What are the chances she’ll listen?  Probably about the same chances she had that I would listen to her when I was 14 and snuck out on my first date. Sigh.

So…now we are starting a new chapter and we are all excited about it. I’ve had a chance to watch mom come back to life these last few weeks. She gets excited when she takes second place in the scrabble game and…holy cow…last week she won FIVE nickels at bingo! Talk about making a haul!!! She is totally happy there. She has jigsaw puzzles to work and other people to sit with her while she works them, games to play, and right now she’s trying to get my sister or me to commit to taking her to the Friday night movie in the auditorium. I thought about letting her go alone for a change, but there will be old men there and I think she may need a chaperone. 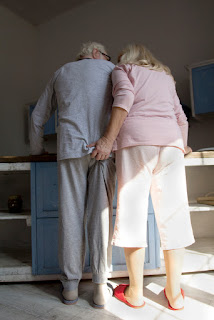 Seriously, I thought when we reached a certain age, we’d forget about the old men. Does it ever end?  Well, this woman is 3 years away from 90 and she’s still lookin’. On one hand, it terrifies me…on the other hand, it makes me smile. I will say that mom came by those hormones naturally—my great grandmother once ran away when she was in her early 70’s. My grandmother called me, in a panic that her mother had been missing for 3 days. Turns out, she got on a bus full of old people going to Vegas, met an old man she thought was hot, got married, lived with him for 2 weeks, then got on a bus back to Phoenix. When we asked why she didn’t bring her new husband back with her, she said it was, “Because he’s an ass.” True story!

This made me wonder…who’s the oldest woman you’ve ever heard talk about old men? Or the oldest young woman you’ve ever seen stealing a glance at a slightly sagging backside or possibly running away to Vegas? (Yeah, my family might have the market cornered on that kind of crazy.) I’d love to hear your stories…if you’ve got ‘em, tell ‘em!