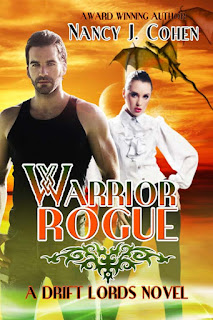 We are very pleased to have Paranormal Romance author Nancy J. Cohen with us to talk about her newest book Warrior Rogue. For a chance to win her romance Circle of Light, be sure to leave a comment at the end. Welcome Nancy!

LARGER THAN LIFE HEROES
What are the qualities of a larger than life hero? While creating the Drift Lords paranormal series, I wanted to imbue my team of warriors with admirable traits and yet still give them vulnerabilities so they’d appeal to readers. They wouldn’t have superhuman powers, but they’d possess fighting skills to battle the evil Trolleks who have invaded Earth from another dimension.

As I see it, a larger than life hero has some extraordinary talent. For example, he can be a normal man who shows exceptional attention to detail, like Sherlock Holmes. Or he can have trained for years in personal combat in a way that makes him a formidable opponent. See Person of Interest on TV for an example of this type of hero. The stoic character John can knock out any number of bad guys without a qualm.

My Drift Lords have the innate ability to sniff cors particles, a substance produced at a rift horizon when a gate opens between dimensions. Thus my warriors can tell when an intrusion has occurred. Their job is to repel the invaders and seal the rifts. When they are not called to duty, they lead normal lives.

Gadgetry may be a part of the hero’s arsenal. My guys carry PIPs, or Personal Intel Platforms. These pocket-sized devices have scanning and sensor capabilities. They’re armed with phase pistols and daggers but are still vulnerable to the Trollek mind touch that turns people into slaves. To immunize themselves, they must either perform a painful process every twenty-four hours, or kiss the heroine who is their destined mate.

The women associated with the Drift Lords are special, as they have derived their powers from the mighty god, Odin. They’re the ones with supernatural abilities that can combat magic. So while the Drift Lords fight using their trained skills, they need their women to deal with otherworldly elements. Norse mythology underlies this series that has ancient prophesies, legendary quests, and non-stop adventure. If the story isn’t a romance, then your hero might have a sidekick. Secondary characters fulfill this function in a fictional book series.

Every hero has his Kryptonite. Thus the Drift Lords aren’t all powerful. Each one of the six men on the team doubts himself for some reason, and that keeps him from moving forward in a relationship with the heroine.

In WARRIOR ROGUE, Paz Hadar feels he isn’t good enough for sophisticated fashion designer Jennifer Dyhr. Cursed by his father for being a freak due to his rare trait, Paz lacks the confidence to build a prototype for his new invention. In his time off, Paz repairs space telecom networks. His new design will revolutionize the interstellar comm systems, but he isn’t ready to take the next step. He needs Jen’s marketing expertise, but he’s reluctant to reveal his secret to her. While Paz has no trouble fighting Trolleks, facing competitors in the corporate world is another issue. He needs Jen to give him the confidence and inspiration he requires to succeed.

For the perfect example of a larger than life hero, look at Superman. While growing up, he doubts his mission on Earth. As an adult, he doubts that Lois Lane could ever be attracted to his alter ego, Clark Kent. Then when her affection becomes obvious, he fears for her safety if they ever hook up. He may be invulnerable to gunfire, but his heart is another matter. Inside, he’s a person with the normal range of emotions. And that’s the key. No matter how powerful your hero may be or how confident he appears, inside he experiences the same internal conflicts as a regular guy. Even if he’s cocky and arrogant, consider what made him that way. What can pierce this emotional armor and cause him anguish? How can the heroine complete him and fulfill his soul? So while we want our larger than life heroes to be powerful and awesome, we also want them to be human like us. 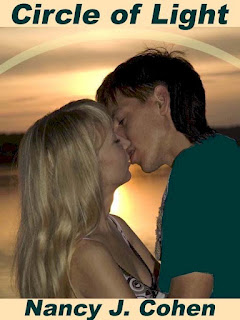 What qualities do you look for in a hero?

**Commenters will be entered into a drawing for an ebook copy of Circle of Light, #1 in Nancy’s Light-Years Trilogy and winner of the HOLT Medallion.

When fashion designer Jennifer Dyhr loses her lead actor for a video-game commercial, a replacement literally drops from the sky. Reluctant to let him leave, she hires him as a model for her studio. But when terrorists attack their flight home, Jen must awaken powers she didn’t know she had to protect them both.

“Rips in the space fabric, special powers, and naked men, oh my! This is a book you will devour in one fell swoop! Nancy J. Cohen has created a very realistic world with characters that you cannot help but to love.”—Faerie Tale Books

Nancy J. Cohen is an award-winning author of romance and mysteries. Her humorous Bad Hair Day mystery series features hairdresser Marla Shore, who solves crimes with wit and style under the sultry Florida sun. Several of these titles have made the IMBA bestseller list. Shear Murder is the tenth and latest title in this series. Nancy's imaginative romances have also proven popular with fans. Her titles in this genre have won the HOLT Medallion Award and Best Book in Romantic SciFi/Fantasy at The Romance Reviews. WARRIOR ROGUE, #2 in the Drift Lords Series, is her latest title from The Wild Rose Press. Active in the writing community and a featured speaker at libraries and conferences, Nancy is listed in Contemporary Authors, Poets & Writers, and Who's Who in U.S. Writers, Editors, & Poets.