A new release for Tina Gerow!

Yep, it’s me again but…shocker…this time I actually know what I’m going to write about.  Yeah!!!  I’m doing the happy dance.  Today I’m going to introduce some of you to a new author you may not know and all of you to a new book and a new cover you’re gonna want to get to know.  Tina Gerow is one of my beloved Butterscotch Martini Girls and you are going to L-O-V-E her stories!  She’s written bunches of books and is an absolute rock star when it comes to writing great stories, so I was thrilled when we were able to partner up on her latest project to build her cover.  It was a lot of work, but it was fun because Tina is an absolute joy to work with…she makes everything fun.  So after looking at hundreds of pictures, dozens of fonts, bunches of different colors, and racking our brains over placement and wording, here is the cover for her new paranormal romance novel, Sleeping With Shadows. 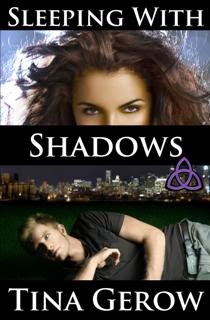 Hot guy, mysterious girl, pretty colors…what’s not to love about that cover?!  What’s it about?  Well, it’s about love, it’s about romance, it’s about Karma, it’s about reincarnation…well, there is no way I’m doing it justice so let’s have Tina tell you what her story is about.  Here’s the cover blurb…

Can soul mates meet in a dream?

Until their past-life karmic cycles are balanced, Matt Martin and Sarah Ryan are on a collision course pushing the world toward a disastrous end.
Will they allow their intense past-life connection to cause them even more missed opportunities in this lifetime? Everyone's karmic tapestry is in jeopardy because of Matt and Sarah. Together they form the thread that threatens to unravel universal karmic harmony.
To make matters worse, a third person brings more difficulty for the duo. When Sarah's spurned ex-lover threatens to destroy her to keep her to himself, he unwittingly dooms millions. Can Sarah and Matt work through this dangerous reincarnation with a twist?

This story is a winner and I want you all to run (don’t walk) to Amazon.com and buy your copy as soon as it comes out.  Shhh—the release date is a secret—but if you’re there on February 1st, you just might be able to get your very own copy.  (But don’t tell anyone I told ya.  K?)   And just to give you a taste of what you’re gonna find in that fabulous new book you will soon be holding in your hand (or on your Kindle), I’m posting an excerpt from Sleeping With Shadows below.  Enjoy it and remember…

Familiar laughter from several rows ahead of him caused a ripple of anticipation inside his gut and Matt scanned the rows in front of him.
There!
Six rows ahead of him on the other side of the aisle he saw just the back, side of her profile, but it was enough.  His gaze skimmed over the dark hair that spilled over creamy shoulders.  A thin purple strap of a tank top peeked out between strands of hair, and the shoulders quaked slightly as she laughed again.
The sound arrowed through Matt like an icy knife to the heart.
Sarah.
He knew her laugh, and he definitely knew her profile.  Matt sat forward in his seat trying to get a better look and hoping she would turn around.
She cocked her head to the side as she listened to something her companion said, and a large hand squeezed Matt’s chest.  The mannerisms, the movements, the laugh--it was Sarah.
He downed the rest of his drink and nearly laughed when he realized his palms had suddenly become sweaty.  Now that he was faced with the prospect of actually finding her, his stomach was tied in knots and he was as insecure as a high school boy going on his first date.
Noting that the flight attendant was several rows behind him and not blocking the aisle, he tucked his empty cup into the seatback pocket, unbuckled his seatbelt and stood.
His back and legs popped and protested as he straightened from his long-cramped position and he stretched before he started forward.  As he took his second step forward, Sarah stood, stepped into the aisle and headed toward the lavatories in the front of the plane.
Matt’s breath caught inside his throat.  Now that she stood, he was absolutely sure it was Sarah.  She wore jeans that lovingly hugged her gentle curves, and her dark hair hung to just between her shoulder blades.  Each of her familiar movements brought to life a thousand memories that skittered through his system like tiny shards of glass--both sharp, but pain-dulled at the same time.
Matt quickened his steps and caught up to her just as they both reached the front of the plane.  He reached out, his fingers closing around the soft skin of her upper arm.  “Sarah?”
She turned and smiled, and Matt’s heart did a somersault.  He’d found her!
His gaze roamed her familiar features--her smile, her eyes, her dimple, and even the look of amusement dancing in her hazel eyes as she gazed up at him.  He’d finally found her.
“Excuse me?”
The voice--obviously not Sarah’s, slapped at him like a bucket of ice water thrown in his face.  He sucked in a breath as he blinked and glanced into the face of a woman who looked nothing like Sarah--and who definitely wasn’t smiling.
Posted by Kayce Lassiter at 3:30 AM