Loons of a Feather is on its way!

Well, my last blog promised I would have a cover reveal and maybe a release date…and I have part of that.  LOL  This is what the cover will look like for my new release, Loons of a Feather… 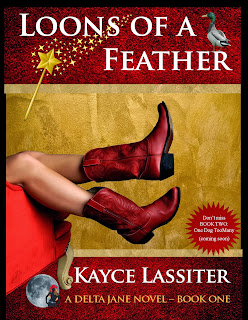 Yeah!!!  I hope you love it as much as I do…but then I designed and created it myself.  So if you hate it, please don’t tell me.  There are times when remaining in the dark ain’t so bad.  J  On the other hand, if you L-O-V-E it, tell me, tell your mother, tell all your friends…and be sure to tell them they will be able to find it on Amazon.com when it’s released.


Now…for a release date…hell, I don’t know.  LOL  No, seriously, I don’t know.  I have been playing around over the holidays and not attending to business like I should be.  So…let’s say it’s going to be released by the end of January…okay, let’s say February 1st.  That sounds like a good date, doesn’t it?  After all, I have to have printed copies in hand for the Chocolate Affaire in February.  So February 1st is the date I’m going with.  The good news is that I have two more blogs due this month, the last one scheduled for the 31st…so I have two more opportunities to confirm that release date.  Woo Hoo!


Now that we have that settled, here’s another excerpt for ya…hope you enjoy it.  And like I said before, if you do, be sure you plan to stop by the Romance Writers’ booth on Saturday or Sunday (2/8-9) and say “Hi” and pick up your signed copy…and be sure you bring enough cash for chocolate whatever you want.  The selection is decadent, to say the least.


Loons of a Feather  (excerpt…)