Interview of M.S. Spencer and Giveaway of THE MASON'S MARK 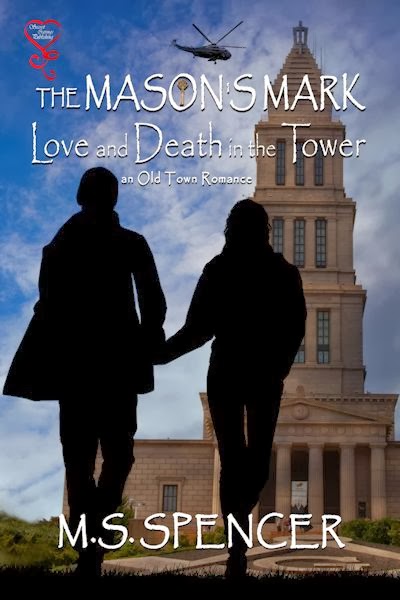 Alexis: Today we have Contemporary Romance author, M.S. Spencer who has just released The Mason’s Mark. Welcome M.S. When did you know you wanted to be a writer?

M.S.: Right after the doctor spanked my newborn behind.

M.S.: I usually start with the setting, then move right on to the last sentence. Everything in between takes forever. I'll write a quick first draft—more like a glorified outline—then fill in the gaps over the next few drafts. In the case of The Mason’s Mark, I thought it would be cool to have a dead body appear on the observation deck way above the city. Then I had to do lots of research on masons and George Washington. But I always stick with my last sentence.

Alexis: Very interesting process. What are you working on now?

M.S.: Tentatively entitled Whirlwind Romance, it's the story of a woman who returns to her home not knowing everyone had been evacuated ahead of a hurricane. She discovers a man shipwrecked in her mangrove swamp. Don't ask me how this happened, but he ends up being a prince, second son of the Grand Duke of a tiny Caribbean island.

Alexis: Really? I live on a Caribbean island. Let me know if you have any questions :-) What has been the most memorable fan comment you ever had?

Alexis: Gotcha. Can you tell us your story of getting “the call”?

M.S.: Oh, that was way back in 2008. I had timidly emailed my publisher asking if she'd had a chance to look at my submission and got a reply that said, "Oops, did I forget to tell you we loved it and want to publish it?" And there I was, alone in this empty space, with no one to hear my squeal.

Alexis: Wow, that is a great example of why authors should follow-up! Where did you get the idea for your latest release?

M.S.: Up until this spring, I lived in Old Town Alexandria. The George Washington Masonic Memorial sits on a high hill and can be seen from all over the area. It's a fascinating building, containing exhibits on freemasonry and a museum of George Washington artifacts. With so much mystery surrounding freemasonry, I thought it would be a good backdrop for a murder mystery. Then when I began to do research, hoo boy. I began with basic sites on Masons, but my Google search led me into a strange world of global intrigue and crime. I followed one thread to a fake Masonic lodge called Propaganda Due, led by a remarkable scam artist named Licio Gelli. He was associated with Nazis, Communists, terrorists, and the Mafia, to name a few. But his connection to a shadowy group called Operation Gladio—supposedly a team of black ops left in Europe after WWII to guard against Communist takeovers—was too intriguing not to use.

Here's a summary of The Mason’s Mark:
In both the best and worst first day at work ever,  docent Claire Wilding meets the man of her dreams, but her carefully rehearsed guided tour of the George Washington National Masonic Memorial falls apart when she discovers a dead body. Together with Detective Ernest Angle, she's drawn into a dark world of black ops and Italian renegade masons. Also cloaked in mystery is her new love Gideon Bliss.  A George Washington expert, he haunts the Memorial, his manner evasive. What is his secret? Claire fears she'll fall in love with him only to learn he's a thief or even a murderer.

Juggling two eccentric mothers, an inquisitive sister, and an increasingly smitten Ernest, Claire must find answers to a complex web of intrigue, including which black ops agent to trust,  whether our first president strayed, and if she and Gideon will ever be together.

Although she has lived or traveled in every continent except Antarctica and Australia (bucket list), M. S. Spencer has spent the last thirty years mostly in Washington, D.C. as a librarian, Congressional staff assistant, speechwriter, editor, birdwatcher, kayaker, policy wonk, non-profit director and parent. Blessed with two fabulous grown children, she has published eight romantic suspense/mystery novels. In an excess of optimism, she has recently heaved the entire ho to Florida with a detour to Maine, leaving behind the cherry blossoms, the monuments, and the political hacks.

Alexis: Don’t forget for a chance to win The Mason’s Mark, leave a comment for M.S. The winner will be drawn Wednesday morning :-)
Posted by Alexis Walker at 7:00 AM