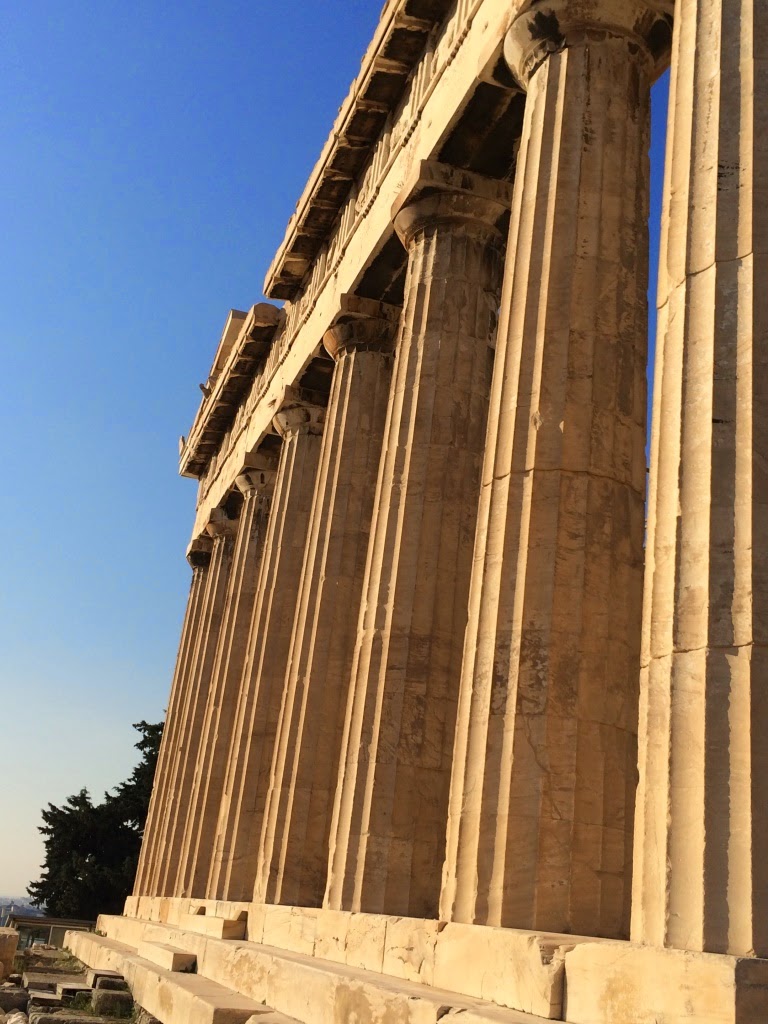 So today was the day I had been waiting for since 6th grade. I was finally going to walk around the acropolis! I couldn’t wait to get off the ship. We had booked a tour that would take us to see the Parthenon and the Temple of Poseidon.


We had another excellent guide on this excursion who told our fellow travelers about some of the myths around each of the venues. I was more than familiar with them, so spent my time soaking in the sights. 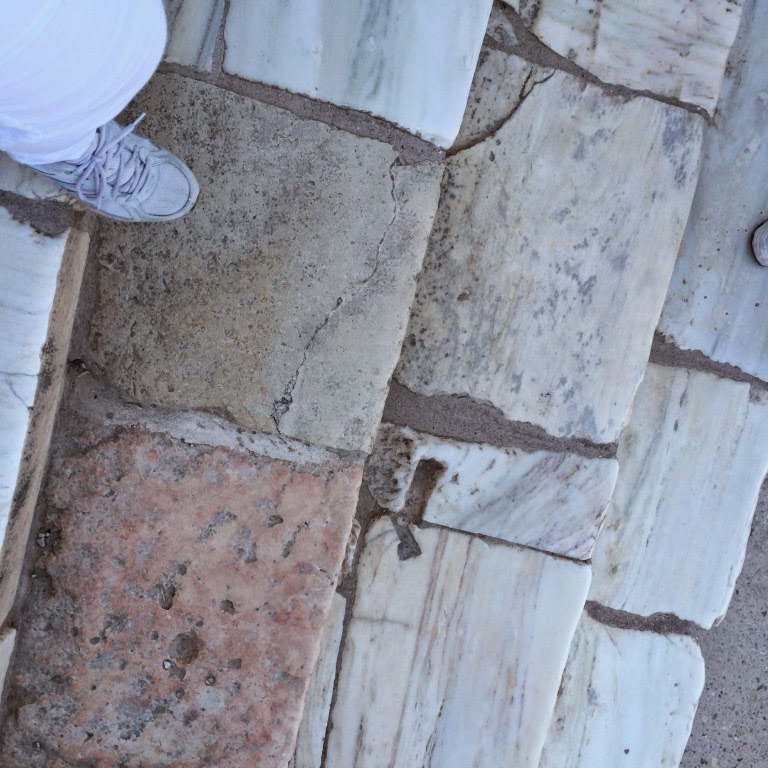 First stop was the Parthenon, Athena’s grand temple. I could not believe the entire top of the acropolis was marble! And in her glory, Athena was said to be white marble with gold accents. It must have been breath-taking and a bit overwhelming. Another smaller temple stands near the Parthenon with the “Porch of the 6 Maidens.” This was a combined temple to both Athena and Poseidon. Both temples are being painstakingly preserved. Our guide said there are few artisans left who know how to do the work. Unfortunately, the temples have sustained bombing from early wars in addition to age and pollution.The maidens on the building now are actually replicas and the real ones are safely preserved in the Acropolis Museum.

From the acropolis I was able to see a temple I had long wondered about, the Temple of Hephaestus. We didn’t have time to see it up close, but I was thrilled to see it at all. I have written a story with that particular god as the hero, but that one is under a different name and not published yet :-) 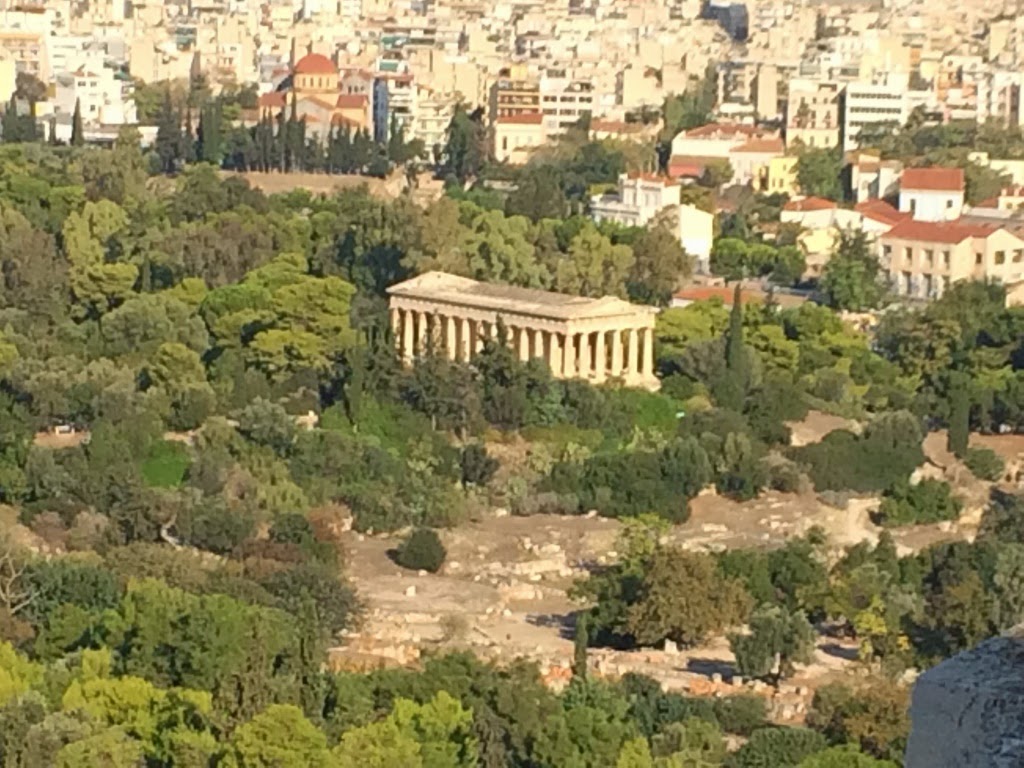 Next we were off to see the temple of Poseidon on Cape Sounion in Attica. It was about a 45 minute drive, most of it along beautiful coastline. When we arrived we found the hilltop of the temple was incredibly windy and the perfect place for this temple. 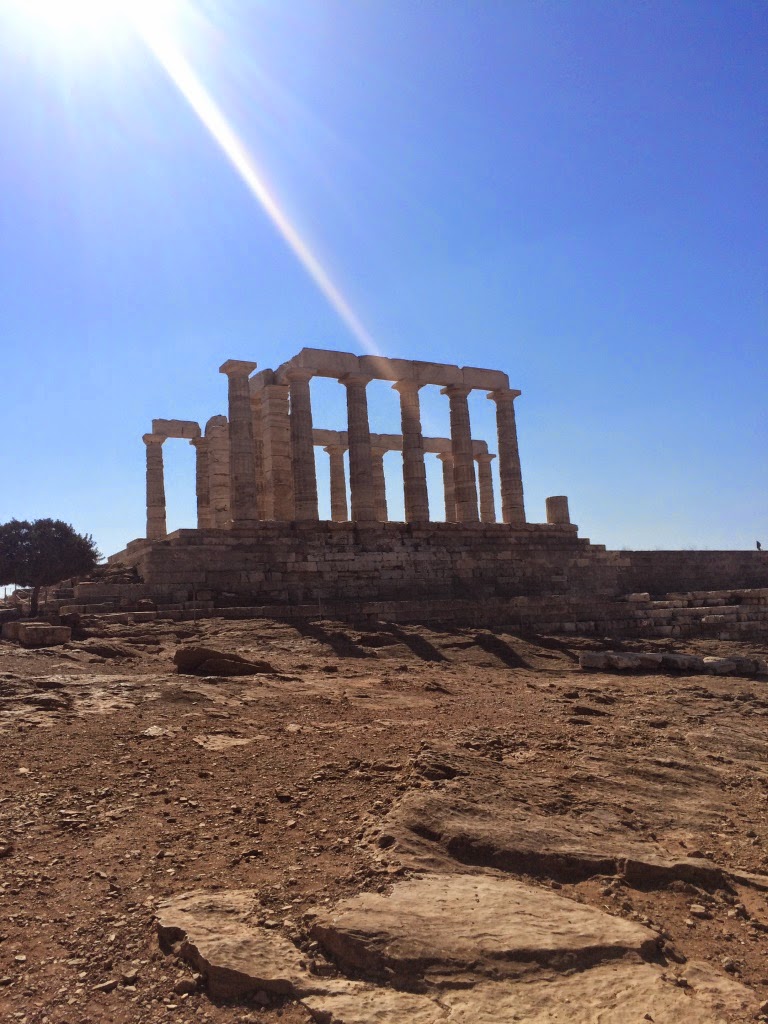 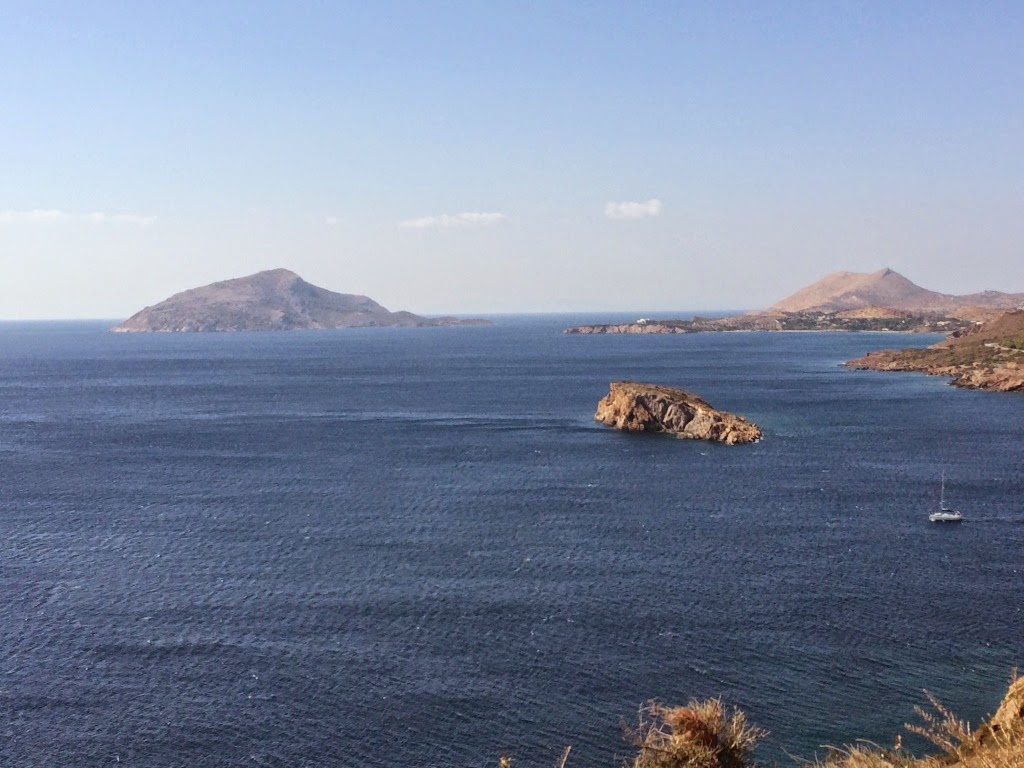 It was an imposing place that looked out over the Aegean Sea. It was perched upon the cliff that King Aegeus threw himself off of, thus giving name to the water below. The temple is roped off because as far back as 1810 when Lord Byron took his Grand Tour, visitors have been carving their names into the stones. Yes, the Romantic poet's name is there :-) 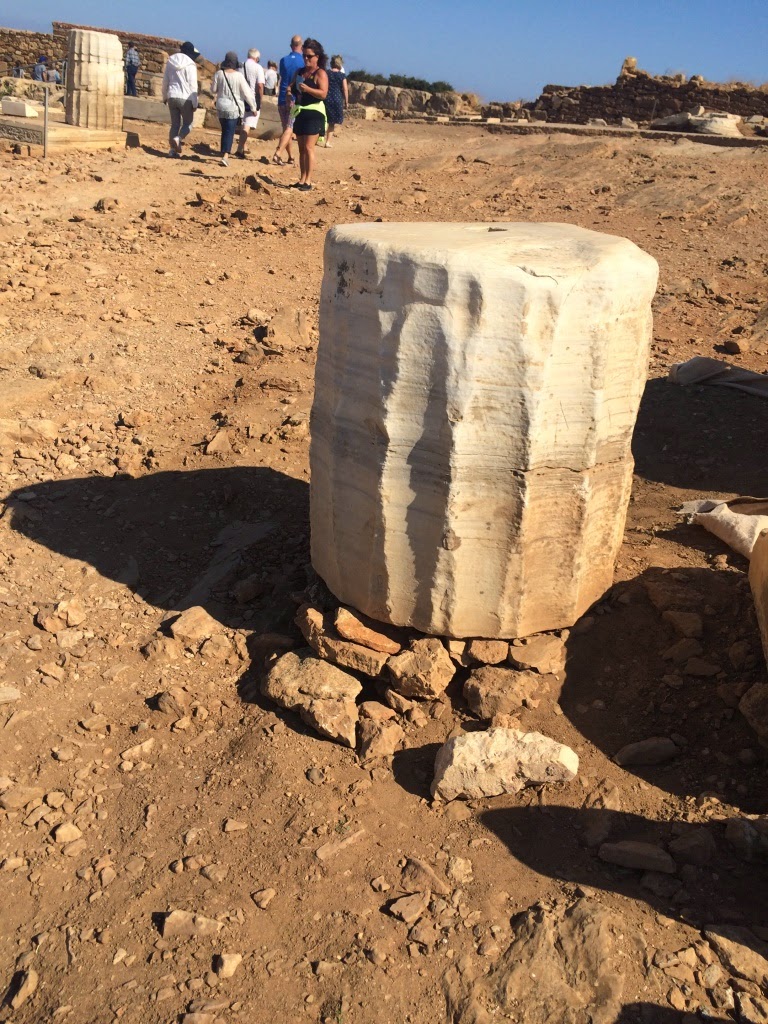 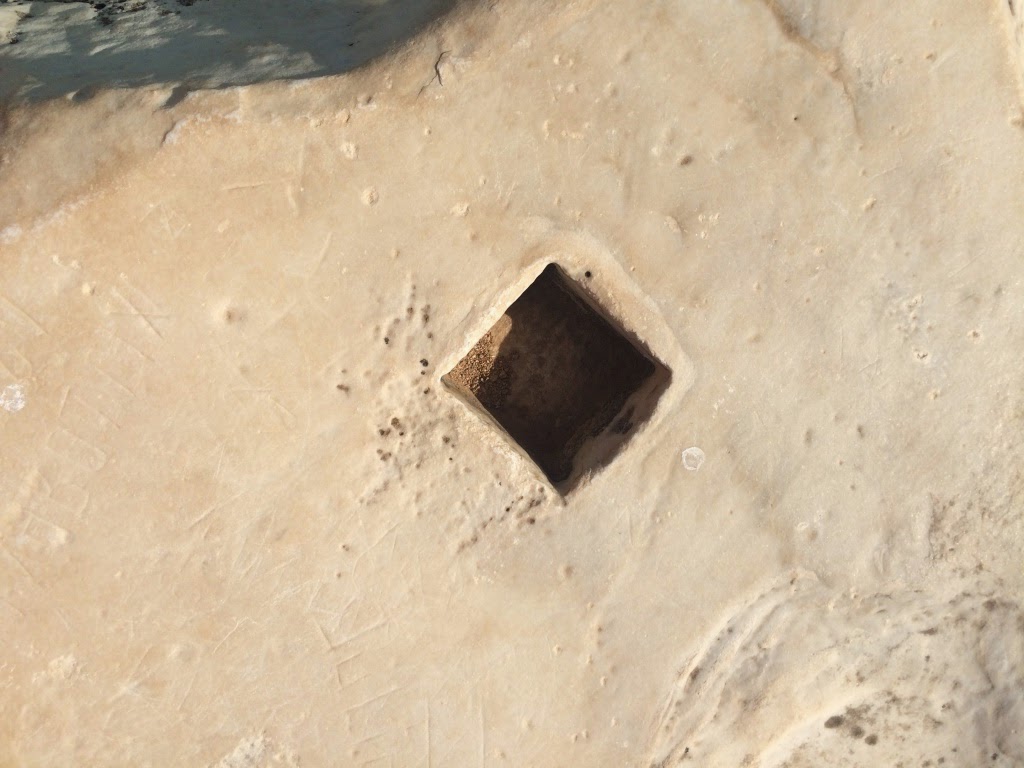 It was here we were able to get a close up view of how these massive columns were constructed. They were actually built on the same principle that Legos use where one side would have a square hole and the other side would have a projecting square so they could be fit together.

It was a long day, but a wonderful experience and a dream come true. Though modern day Athens looks nothing like ancient Athens, walking around the temples definitely brought that ancient time alive for me. 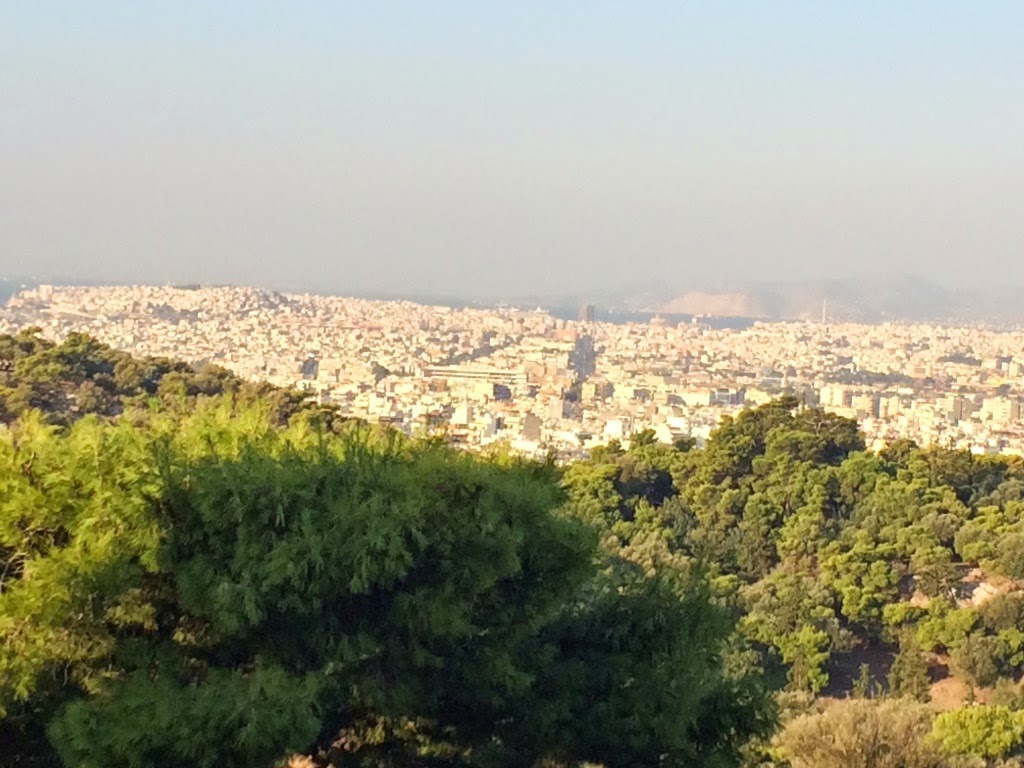 After a lovely nap on the comfortable motor coach, we returned to our ship, ready to enjoy the evening’s dinner and entertainment. This night we were able to stay up as late as we wanted since the next day was at sea and no reason to wake up early. We were looking forward to a bit of relaxing.