New Release! Lana and the Laid by Sabrina York 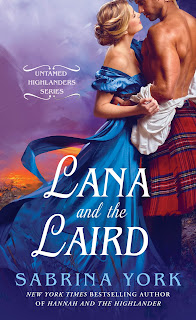 Lana and the Laird
by Sabrina York

LOVE IS A BATTLEFIELD
Lachlan Sinclair cannot escape his accursed heritage in his Highlands homeland. Somewhat resigned to the fate that destroyed his ancestors, he is prepared to live his life without an heir, without a wife―without love. But when he meets the woman of his dreams in the flesh, the bewitching lass makes him want to throw away his cursed, restrained existence…and unleash the highlander within…

Lana Dounreay has only seen the Duke of Caithness in her dreams as a wild, rugged man, while in reality, his life has been cramped by curses and cravats. He may have forgone his kilt and lost his brogue, but Lana knows that the heart of a true Scotsman beats within his broad, muscular chest. But what plans does the mysterious, passionate Lachlan have in mind for her―and can she convince him that love is stronger than all else?

EXCERPT:
Lachlan threw back his covers and set his feet on the floor. He had to wait until he stopped shaking to stand, and even then his legs were limp. When he could, he stumbled to the wardrobe and found a pair of breeches and a simple shirt. After a fright like this, he needed to walk, to clear his mind, his soul, of the terror.
He didn’t wake Dougal. He never did. It was unfair to ask his cousin to bear the onus of his curse. Lachlan made his way through the deserted halls of Lochlannach Castle, down the grand staircase, and headed for the terrace that overlooked the crashing sea below. There was a moon tonight. The view of Dunnet Bay would calm his soul. And if it did not, there was always the option of stepping over the edge and into oblivion.
But as he emerged into the cool velvet night, it wasn’t oblivion that awaited him.
It was Lana Dounreay.
She sat on the seawall staring out at his coveted view, dressed in a diaphanous froth that had to be her nightdress. Her hair, turned silver by the night, hung down over her shoulders, glimmering in the moonlight.
His heart pattered, but for a very different reason.
She was so lovely, so serene, it made his breath catch.
He came to stand beside her without a word, tucking his hands in his pockets and staring at the sea. She glanced up at him, but without surprise, as though she had expected him. Together they gazed out at the dark ripples of the water, the shards of light dancing over the surface of the blackness.
A gentle breeze wafted by, bringing with it her scent. It made him dizzy.
Ah, how he wished . . .
He wished he were another man. A man not cursed. A man not haunted. A man not doomed to an early death.
A man who could have kissed her once.
How magnificent would that have been?
He must have sighed because she put her hand on his arm. It was warm. Soft. Alluring.
“Can you no’ sleep?” she asked in a soothing timbre.
He glanced at her and his gaze was snared. Her eyes were so wide, so blue, so deep. He wanted to drown in them. “No. I . . . had a visitor.”
Her brow rumpled. “A visitor?”
“Yes.” He turned back to the sea. Though he was loath to discuss this with anyone, lest they think him mad, he knew she would understand. “My father.”
“Ah. I see. Does he visit you often?”
Lachlan snorted a laugh but it was really not one. “Too often.”
Lana tipped her head to the side. “You . . . doona enjoy his visits?”
“I do not. They are . . . terrifying.”
Why this puzzled her was a mystery. Ghosts were terrifying.
“Can you describe the visit?”
Something in her tone caught his attention. He sat beside her on the wall, listening to the waves crash below. It took a while for him to collect his thoughts, but she waited. “He is always dour. Pained. There is wailing and—”
“Wailing?”
“Yes. But it is the chains that are the most perturbing.”
Lana blinked. “Chains?”
“Yes. He’s draped in them. Bound by them. It is his eternal torment. Because of the curse.”
“How odd. None of the ghosts I know wear chains.”
“They are probably not cursed.”
“Probably not.” Her lips quirked as she murmured, “As there are no such things as curses.”
His heart lurched. Would that that were true. He studied her face.  Beautiful as it was, that hint of amusement pricked at him. “Do you find this funny?”
“Nae. No’ a bit of it.” She patted his hand. Her heat lingered. “’Tis just . . . odd.”
“What is odd?” Was he really asking? This whole conversation was odd.
“Odd that your ghost wears chains. Chains are verra . . . of this earth, after all.”
“He’s being punished. They are probably metaphorical.”
“Most likely.”
As they turned back to the vista before them, Lachlan reflected that this was, indeed, a surreal conversation to be having. But then, with someone like Lana, it made sense.
“Your mother doesna wear chains.”
His belly roiled at the thought. “I am . . . gratified to hear it.”
“She seems quite at peace.”
“Good to know.”
“Except that she worries about you.”
“Will you tell her I’m fine?”
“I canna.”
He gaped at her.
She lifted a shoulder. “I willna lie to her. Besides, she knows you’re no’ a happy man.”
A happy man? Was there such a thing?
“I am a cursed man.”
“Pffft.”
“I am.” He didn’t know why he smiled. His lips just wanted to move that way.
What was it about this woman, this sprite, that made the shadows waft away? Made all his dark ruminations evaporate like mists in the sunlight? Made him smile after the horrific encounter he’d just had?
Ah, but it didn’t seem so horrific. Not now. Not with her by his side.
Lana shot him a glance that warmed his heart. “She thought you looked verra fine tonight at dinner.”
“Ah. The kilt.”
“Aye.” Her lashes fluttered. “I thought you looked verra fine as well.”
Now, that stirred something in him. Something illicit and naughty. “Did you?”
“Aye.”
“Was I manly?” He was teasing, perhaps, but when she flicked a glance at him, with that expression—one of hunger and admiration and . . . heat—all his playfulness withered, scorched by the blazing flare of his lust.
There was something about the cloak of night, the refreshing scent of the sea, the fragrance of her perfume, the way her hair riffled in the breeze. Or maybe it was his churning need to wipe the memory of his father’s visit from his mind, or the suddenly clawing desire to be a man he could never be . . . but Lachlan had to kiss her. Everything in him ached for it.
And so he did.
Though it was foolish and injudicious and wildly inappropriate of him, he did.
GET IT NOW:  http://amzn.to/1UC99dM

WHAT PEOPLE ARE SAYING ABOUT SABRINA YORK’S UNTAMED HIGHLANDERS

Bold and steamy—Publisher’s Weekly
A stunning tale from beginning to end—Love, Life and Booklust
Top Pick—Night Owl Reviews
York turns her talent for sizzle to men in kilts—and the women who love them—in her newest sexy romp—RT Magazine

Her Royal Hotness, Sabrina York, is the New York Times and USA Today Bestselling author of hot, humorous stories for smart and sexy readers. With over 25 titles her books range from sweet & snarky to scorching romance. Visit her webpage at www.sabrinayork.com to check out her books, excerpts and contests. Represented by Lane Heymont with the Seymour Agency.
Download a free teaser book filled with excerpts and reviews for her work.

Email ThisBlogThis!Share to TwitterShare to FacebookShare to Pinterest
Labels: free teaser, Hannah and the Highlander, Laird of Her Heart, Lana and the Laird, Luscious - Seven Nights of Sin Collection, new release, Sabrina York, Susana and the Scot, Tarnished Honor