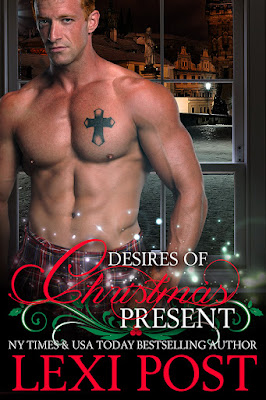 Sometimes not knowing is better…for everyone.

Spirit of Christmas Present, Kentucky born Coco Baker, has just been given the assignment of her career, but she must partner with a Scottish upper class snob, who thinks he knows what’s best for their living client. Despite him, she’s determined to do well on this case and find out what the arrogant man is hiding.

Ian Fergusson has carefully cultivated a standoffish presence in the afterlife, letting no one get close for fear of them discovering his greatest failing in life. When he’s required to work with the vivacious Coco, both his desire and his fear escalate.

Unfortunately, Coco won’t leave well enough alone and to protect her, Ian finds himself forced to face his past and risk his heart and soul…again.

Excerpt:
Coco turned around in her chair. Ian Fergusson stood just inside the door. His tall, broad-shouldered physique looked hard beneath his golf shirt even while relaxed. His face was equally hard as were his steel grey eyes. His angular jaw and sharp nose with a slight hook downward would have been enough to warn anyone to stay away, and beneath his short red hair were equally sharp ears. Everything about him was unrelenting.


He looked down his nose at her before raising his gaze to Cameron who had stood at his entrance. “I was informed that you needed me for a case. I can come back when you’re done.”
Her boss held out his hand and smiled. “No, come in. You’ll be working with Coco on this one.”
Ian raised an eyebrow and strode forward to clasp Cameron’s hand. “I was unaware you ever sent two spirit guides on one case. I have always worked alone. I complete my assignment successfully that way.”
Cameron nodded as he sat again. “Please.” He motioned toward the other chair.
“I’m good.” Ian waved him off.
Coco gritted her teeth. That was so like him. He thought he was above them all and could do what he wanted. She turned her gaze to Cameron. “Why do you need two of us?”
Ian frowned. “Yes. I can’t imagine a case so difficult that it takes two spirit guides.”
A team player he was not, but she’d already known that.
Cameron studied her, then Ian. When his gaze drifted between them, it was obvious that whatever he was about to say was important. Finally, he spoke, but didn’t make eye contact with either of them. “Your case is my wife.”
Shocked, she sat forward in her chair. “Your wife? But I thought—”
Ian interrupted her. “I was of the understanding that we were not allowed to take assignments directly related to us.”
Cameron’s gaze moved to Ian. “We aren’t. However, this case has been given approval by Remiel.”
“I didn’t realize special dispensation was possible.”
Seriously? She swallowed an exasperated sigh. “That’s exactly what Cameron just said.” Dimwit. She shook her head at Ian.
He didn’t even acknowledge her, his gaze riveted to Cameron.
Her boss stared Ian down, which gave her a certain amount of satisfaction. Cameron’s voice was hard. “This is a unique circumstance, Ian.”
Her new “partner” had the grace to back down. Shoot, how was she going to control him if he tried pulling that crap on her? Maybe she needed to channel Cameron’s deep tones.
The silence grew awkward so she jumped in. “What can we do for your wife?”
Cameron finally stopped glowering at Ian. Maybe he didn’t like her partner either. That had to suck to not like your own employee. When she was alive, she had times when just being nice to her fellow workers was tough.
“Holly has stopped her deep mourning thanks to the spirit guides I sent to her last Christmas, but she has failed to join the living. She goes to work and does her errands, but beyond that, she stays by herself. It’s become worse with the Christmas season.” Cameron paused. “It’s critical that she begin to socialize again.”
Ian nodded, but Coco wanted more. “If your wife has stopped her mourning, why is she not socializing? Do you know? That might help us with our approach.”
“I believe it’s because she doesn’t want to intrude on other people’s lives. She thinks everyone else has the perfect life. Also, people who have come into our shop have shown her pity and she hates that.”
Coco could hear the pride in Cameron’s voice. Rumors around the lounge had it that Cameron and Holly had one of those rare loves that only happen to one in a hundred couples. She’d seen many perfectly matched couples both while alive and in her new existence. If what her boss and his wife had once had was even better than that then she would do whatever it took to help Holly.
She glanced at Ian. He remained absolutely still, staring at Cameron. Did the man have no reaction? No feelings? His appearance seemed to grow more distinct, intense. She blinked. Nope. He was still a hard statue.
When she looked back at her boss, he was studying her, but he quickly moved his attention to Ian. “Do you have any questions?”
“Yes, one.” He paused and spared her a brief look. “If you have Coco, who is quite capable of handling a case, then why do you need me to accompany her?”
Her mouth dropped open in astonishment. Was that a compliment from “Mr. Holier Than Thou”? The man did nothing but argue with her about anything and everything when they came into accidental contact with each other. Now he complimented her?
Cameron’s mouth had opened and closed a couple times before he gave voice to his thoughts. “Coco, if you wouldn’t mind, I’d like to talk to Ian alone.”
She rose. “Of course. I’ll drop in and see how Holly is.” She looked at Ian. “If you are still on the case, just find me when you’re ready.”
“He will still be on the case.” Cameron’s hard tone sent a shiver down her spine. He was an easy going boss, not like her last one, but he did have a certain tone that made a person want to hightail it out of his office.
“Great.” She didn’t mean the word in any way, but she also didn’t want to piss off Cameron. Phasing, she floated down through the floor, anxious to meet the woman who had captured her boss’s heart.

If you haven't read Pleasures of Christmas Past, you may want to start with that one. Just sayin' ;-)