Hey, ya'all. How's everyone doing?  Great, I hope!!!  Well, here we are again...it's Thursday night and my blog is due tomorrow, and I got nuthin. LOL  I was supposed to be going under the knife tomorrow morning for a bone fragment in one elbow, but I got a last minute reprieve, which is a VERY good thing, given that this has been one of those weeks where everything you do seems to fall apart and ends up a pile of junk on the living room floor.  :)  So surgery postponed and now I don't have to worry about the doc getting hit by lightning while he's got a metal probe stuck in my elbow. Yeah!

So, what I'm gonna do instead is give you a sneak peek at the new cover for my story that's coming out later this week.  It's the first book in the SpellMaker Series...a new series about witches in cowgirl boots, hiding in plain sight, and gargoyles who wear cowboy hats.  It came out in September as part of the Butterscotch Martini Girls box set, Bodyguard.  But now I'll be publishing it stand-alone under its own cover.  Woo Hoo!  So, here's the cover, and I hope you love it because I designed it myself. There's an excerpt posted below...Enjoy!  And if you love it, keep an eye open for it to come out on Monday! 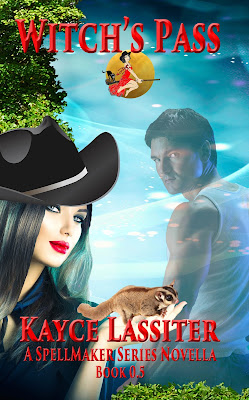 Grant addressed the men.  “Gentlemen, as I said on the phone, my daughter Quayk is missing.  No one has seen her since this morning.  What do you need to know about her?  Do you need a picture?”

McCall shook his head.  “No, we have all that.  Pulled it up before we left.  I have two members of my team I would like to leave with your family.  They will provide protection while they question them to see if there is anything else we can learn.”  He turned his head and motioned toward a group of people standing next to his truck.  “Garcia.”

A tall, slender woman with caramel skin, dark brown eyes, and long, black hair pulled back in a ponytail stepped forward.  She wore black leggings, a black short-sleeve T-shirt, black boots, and had a gun belt strapped around her hips.

“This is Alice Garcia.  She’ll be in charge of things here at the house.”

The woman smiled and nodded as she met Grant’s gaze fearlessly.  “Hello.  I’ll take good care of your family.”

Grant had no doubt she would.  He could sense a comfort spell emanating from her also.  He could tell from the flavor of the spell that she was an Empath, and he was grateful she would be able to sense his family’s needs and put them at ease.

McCall turned back toward his truck.  “Slicer.”

A man dressed in dark pink from head to toe stepped forward, and it was clear from the way he moved, he was probably gay.  The man was of mixed blood and could have been a Prince clone.   But his most prominent features were his eyes—a light golden brown, with slightly horizontal, oval-shaped irises.  Not at all what he’d expected.  Grant turned toward McCall and raised one brow.  “Slicer?”

One side of McCall’s mouth pulled up in a grin.  “Yeah.  This is Eric Rittenhouse.  We call him Slicer because of his special talents.”

Grant stared at the man.  “And what would those be?”

That explains the eyes.

McCall nodded.  “And people like him.  So they tell him shit.”

Holy hell, what a crew!

“Oh, you know I will, sir.”  Slicer gave him a salute that was something straight out of a sitcom routine, and Grant had to resist the urge to laugh.

McCall turned back toward the group next to the truck.  “Okay, the rest of you come on up.”
The group stepped forward and formed a line in front of Grant.

McCall introduced each of them individually.  “This is Tracker—our field survival expert, and a lion shifter.  He can track anything that walks, hops, runs, or slithers, and sometimes even things that fly with a little assistance.”

Alex pointed to a man carrying an automatic weapon.  “Shooter here is our ordnance expert and a military-trained sniper. He a can hit a bird in flight at a mile every time with the naked eye.  He’s a falcon shifter.”

The next man to step forward was dressed in black and fairly non-descript—someone you might see and never remember later.  “This is Boxcar, and he’s a raccoon shifter.  He can get in and out of anything, and don’t shoot dice with him if you want to keep your shirt.”

Alex motioned for a man in a well-worn white straw hat to step forward.  “Cowboy here is my ranch foreman, and has a team of search and rescue experts that work with him.”  Cowboy nodded and stepped back in line.

Grant asked, “Is he a shifter too?”

Alec shook his head.  “No.  He’s a psychic with strong telepathic abilities.  That makes him good with animals, and he can communicate with his search and rescue team over long distances, even without these headsets.”

“And this is Meow.”  Alex grinned as he introduced the last man.  “He’s our main strategist, an expert in stealth recovery, and trained in human psychology and behavior.  He can read you like a book, and has an astounding ability to imitate the sound of any animal.  You hear a kitten outside the door, don’t go check.”

Alex laughed.  “No, Human.  Just weird and twisted.”
Posted by Kayce Lassiter at 3:00 AM