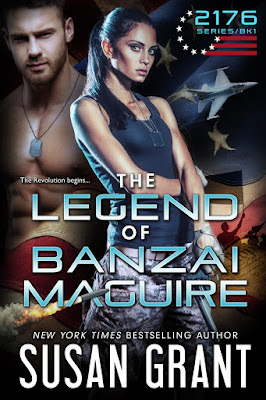 THE LEGEND OF BANZAI MAGUIRE
The 2176 Freedom Series, Book 1

About The Legend of Banzai Maguire:

The year: 2016. While flying a peacekeeping mission over North Korea, Air Force pilot Bree "Banzai" Maguire is shot down. Instead of the North Korean troops she expected, she finds herself captured by a mad scientist and put in bio-stasis. When she wakes, everything has changed. It's 2176, the world is in crisis, and she is a hotly contested prize. Once, Banzai's job was to protect democracy; now a mysterious voice claims she must bring it back.

The year: 2176. U.C.E. Commander Ty Armstrong is a decorated SEAL, combat veteran, and part-time treasure hunter. Seeking one elusive prize has become a personal obsession for him: Banzai Maguire, who was never found after her mysterious disappearance 160 years earlier. His quest to find her remains takes him into enemy territory where he discovers that not only is she very much alive, he might have already fallen in love with her. But before he can bring her to safety, they are captured by the charming, yet ruthless, Emperor of Asia. Ty vows to escape with Banzai at his side. But his captor has other plans for him—and for Banzai Maguire.

Praise for The Legend of Banzai Maguire:

“If Grant’s faithful fighter jet descriptions don’t snag readers from the outset, her fierce, funny, tough-as-nails heroine will. With its cliffhanger conclusion, awe-inspiring characters and droll humor, this book is a strong launch for a very promising series.” — Publishers Weekly
The Legend of Banzai Maguire excerpt:
Prologue

If you have the chance to live life to the fullest, do it. Don’t hold back, don’t be afraid, take the absolutely biggest bite out of this existence that you can. The rewards are immeasurable, the eventual fulfillment soul-deep. I know. I guess you could say that I’m an expert on the subject. I’ve lived two lives, both of them to the hilt.
My name is Maguire, Bree Maguire. But you know me as Banzai, even now, after years of accumulated titles, honors, and a marriage have lengthened my legal name to the point where I can’t help sighing long and silently at official events attended by those who expect and actually enjoy that sort of pomp, pageantry those closest to me know I’d rather avoid—the same people who know I never would.
Ceremony is a small sacrifice to make, you see. Once, I gave up everything that is important to a person. But, I would have died for my country, if asked. Instead, I was reborn into something better, something stronger. The United States was, too.
My quest took me to places I never imagined—not only geographical, but of the heart. It was how I first met the man who would be everything to me.
Now that I’m one hundred years into this winding path called life, my children tell me that I should record my memoirs before I pass on and leave the chore to the official biographers, who’ll no doubt use the opportunity to make me into more of a legend than I already am—to my dismay, because the men and women I consider the true heroes went on with their lives after their deeds were done, some quite humbly and certainly without the idolization directed toward me and my husband. They are the ones who deserve our remembrance, those men and women. And now, here in this record of what happened, they will receive recognition.
You may wonder if our pasts were as colorful as they seem, if our adventures were truly as fantastic and wild as you learned in school. Why, yes, they were. They were all that, and more…

About The Scarlet Empress:

Shot down over North Korea, Air Force fighter pilot Cam “Scarlet" Tucker is imprisoned and put in bio-stasis. She is awakened 160 years later to learn that her wingmate and best friend also survived. Now the “legendary” Banzai Maguire, Bree is being held for treason in the country that was once the United States.

Cam has problems of her own—big problems. She’s in the masterful hands of Prince Kyber, the dictator whom her friend thwarted. He won’t get fooled again. With the mysterious Shadow Voice urging revolution, and her friend in chains, Cam wants the sexy emperor on her side—and maybe a whole lot more. But her role in the thrilling mission to save her country has to come first. Banzai wouldn’t surrender, and Cam won’t either. It’s time to give a royal butt kicking, and Cam knows just where to start.

Praise for The Scarlet Empress:

“I am well aware of the toil and blood it will cost you to come to me, Banzai Maguire, but come to me you must. Hear my words; heed my call. I am waiting for you.”
—The Voice of Freedom, heard on the Trans-Malaysian Interweb, October 2176

“Exhilarating! As Bree fights for her life, Cam finds herself confronting one of the most powerful men in the world. Grant’s writing remains vivid whether describing astounding futuristic advances, depicting a vicious gun volley or drawing a poignant love scene.” — Publishers Weekly

“Grant’s futuristic military romance demonstrates her trademark qualities of humor, passion, and devotion to duty, as well as a riveting David-and-Goliath conflict. Especially timely in view of current events, The Scarlet Empress offers a thrillingly pointed reminder of the cost of freedom and the continuing sacrifices required of those who value liberty.” — Booklist

Rocks pelted a sleek black sedan making halting progress through the streets of New Washington, D.C. Hastily erected electronic barriers restrained an angry mob. Black-clad UCE police were too overwhelmed, trying to keep the protestors in one place to worry about the few who got free.
A small group ran onto the road and emptied their arsenal of rocks at the approaching sedan. A proximity alarm beeped inside the vehicle, and the driver braked.
“Go!” UCE Supreme Commander General Aaron Armstrong rapped his knuckles on the clear barrier separating him from his driver. Do not stop, he mouthed to the sergeant, who floored the accelerator. There was a thud, a jerk of the steering wheel. A body tumbled over the bumper, striking a corner of the windshield before rolling off into the street.
How am I to avoid hitting them when they throw themselves at the car? Once more, he pressed the phone to his ear. “Back with you, Mr. President—”
A flaming pipe glanced off the hood and whacked the shatterproof windshield.
“Yes, yes, I know,” Armstrong grumbled. “Next time I’ll take a heli-jet.”
The sedan accelerated. Armstrong could no longer see the individuals in the crowd or read the slogans on the signs they carried. The vintage American flags—it seemed every protester brandished such an artifact now—became a broad, neutral blur. Speed had canceled out the fury of the mob.
The general relaxed against the rear passenger seat. It was recently upholstered in UCE blue; he could smell the new leather. He lifted the phone back to his ear. Before he could speak, a communicator resting in his other hand vibrated—once, twice, three times. His fingers flexed convulsively around the unit. It repeated the code, as he had hoped. Finally. He had waited long enough for this moment. Too long, he often feared of late.
“Hello? Are you there, Aaron?” the president was shouting into the phone.
“Indeed I am.” A smile curved the general’s mouth. “And with news. Good news.”
There was silence on the other end of the phone line. It was the closest he had ever heard Julius Beauchamp come to breathless anticipation.
“We found her,” Armstrong told him.
“Banzai Maguire…”
“Yes. We’ve a positive location. The team is in place.”
“Grab her! Despite our every effort to stop those broadcasts, the damage done, Aaron…it is incalculable. Banzai’s ability to escape us has reached mythical proportions amongst our citizenry. They say she turns to air to slip out of any trap, that she catches bullets with her teeth. She can change the minds of men with a single look.”
“Surely you don’t believe that, Mr. President.”
Beauchamp growled. “I want her heart on a platter.”
“A bit medieval, that, but it can be done.”
“Banzai is the worst threat we’ve faced in two centuries. Her weapons? Passion. Inspiration,” the president spat. “That’s my job, Aaron—my job to inspire the people, not this outsider’s. She doesn’t know jack about our world. Her actions prove it. She doesn’t understand how only we, the UCE, stand between world peace and chaos. I want her silenced. I want her gone.”
Armstrong smiled. “All but done, Mr. President. All but done.”
“And the second pilot? Lieutenant Tucker? Could she have been raised, too, like the legends suggest? Any sign that she survived?”
“None yet. She was not in the cave where Banzai first surfaced, though they were said to be buried there together.”
“A paradox. How do you explain it?”
“Interference by an outside party is my hunch. Someone wants her as badly as we do. If Cameron Tucker’s alive, Mr. President, I’ll find her. Meanwhile, we soon will have Banzai.”
Ahead, several hundred protesters broke through a barrier and surged into the street, setting off the black sedan’s proximity alarm once more. A soft computerized voice repeated the warning, “Stop. Obstruction in roadway. Stop.”
The general exchanged a sharp glance with his driver. The car didn’t slow.
“Don’t let Banzai get away, Aaron,” the president warned.
“Have no worries.” The general flicked a speck of dust off the steel toe of his boot. “The team is moving in. There’s nowhere for her to go.”
They say she turns to air to slip out of any trap, that she catches bullets with her teeth. She can change the minds of men with a single look…
The president might very well fret the growing legend, but Armstrong had an advantage no one else did—he knew Banzai’s Achilles’ heel, her one weakness.
The chink in her armor was his son.
By the time the first of the rocks began hitting the windshield, the general had ended the encrypted call. Crossing one leg over the other, he settled in for a turbulent ride to the White House. Nothing could affect his mood now. At long last, Banzai Maguire was his. 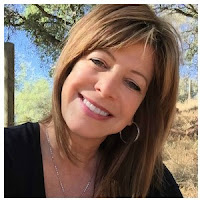 About Susan:
When NY Times/USA Today bestselling author and Air Force veteran Susan Grant isn’t driving an 18-wheeler (AKA a 747 jumbo jet) she loves writing romantic, action-packed stories featuring gutsy woman and honorable men. Flying to exotic places and trying every kind of food imaginable helps Susan bring her sci-fi worlds alive for readers. She is a winner of the prestigious RITA award for her book Contact, an alien abduction sci-fi romance.