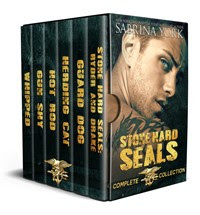 Stone Hard SEALS Collection by Sabrina York
Don’t miss this binge-worthy series featuring action, adventure and steamy romance in exotic locations. Hot alpha military heroes, strong snarky heroines, laugh-out-loud of humor and a tiara wearing Chihuahua. What Readers are Saying About Stone Hard SEALs “Sabrina York knows how to write Alpha males” “Who doesn't like hard-bodied SEALS in action?” “I love an alpha male who fights just as hard for his woman as he does for his country.” “If you like sexy men in the military, bold women and HEA with a little danger thrown in-BUY THIS BOOK!” “Snappy dialogue, hunky alpha heroes, plucky heroines, steamy hot sex,
whatmore can one ask for?”

Book One: Ryder A hostage rescue mission turns Ryder “Stone” Maddox’s world on its ear when he comes face-to-face with his greatest fear: A woman he cannot resist. But he has to resist Lily Wilson. He’s vowed never to fall in love. Besides, as the daughter of a senator, she is definitely off-limits. Lily sees things differently. Irresistibly drawn to this hot, hard SEAL, she is determined to prove they belong together…and that her man does not have a heart of stone. (Originally published in the NYT and USA Today Bestselling Hot Alpha SEALs collection)
Book Two: Drake Drake Ronan is all man—a rock hard SEAL who doesn’t need help from anyone. Doesn’t need anyone. But when he’s shot during a dangerous rescue mission, and has to rely on a beautiful nurse to survive, he realizes he has to rethink his resolution. Suddenly he can’t imagine his life without Brandy in it. It’s a damn shame she has a secret that could ruin everything.

Book Three: Guard Dog Mason Steele expected to be a SEAL until the day he died. And he was. A pity they revived him. Now he’s been mustered out of the Navy and his life seems wholly unsatisfying. He misses the action; he misses the camaraderie; he misses being able to use his tightly-honed skills. He’s lucky to have snagged this job with Ryder’s Stone Hard SEALs Services as a bodyguard—it provides some hope for his future. But the last thing he wants to do is babysit a spoiled heiress who is obsessed with the color of her nail polish and carries a Chihuahua in her purse. But there’s more to Pansy Hightower than can be seen at first glance. She’s smart, sassy and determined to save the business her late mother built. She resents having a guard dog and does what she can to lose her muscular shadow. But when it becomes clear that someone is targeting her—perhaps for the same kind of fatal “accident” that befell her mother, she decides having the 240 pound SEAL with killer instincts and lethal hands at her back might be a good idea after all. Until they share a kiss, that is. Until those lethal hands prove they have other talents as well. Talents that leave her breathless and wanting and weak. The last thing either of them wants is a relationship, but the scorching passion between them cannot be denied…even though it will undoubtedly spell disaster for them both. (Originally published in Kindle World)

Book Four: Herding Cat It’s insane to want him, this beautiful, strong, sexy man. Not just because her hot bodyguard is tasked with herding her safely through the exotic night markets of Hong Kong. And not just because she’s his boss. But because they are worlds apart. What they have can only be a fling. It can’t last forever. But Garrett has other ideas. (Originally published in Kindle World)

Book Five: Hot Rod A standard witness protection mission goes wrong, thrusting Matt Tate and his target, a wise-cracking hooker named Vixen LaFleur, into a fight for their lives. But flying bullets and lurking villains are not nearly as dangerous as risking the heart. Against his will, Matt is attracted to the dauntless, exasperating woman he’s supposed to be protecting, but she is harboring a secret. One that could heal his wounded soul, or crush it. (Originally published in Kindle World)

Book Six: Gun Shy Returning to his hometown to sell his hated father’s ranch, the last thing Luke Grant expects to find on his first day in town is a reason to stay. But there she is, Melissa Divine. The girl he loved all those years ago. But Melissa has changed since those innocent days. She’s just escaped from a hellish marriage and wants nothing to do with any man. Especially not this big, burly alpha biker who reminds her of her ex. Can this former SEAL change her mind before his time runs out? (Originally published in Kindle World)

Bonus Book: Whipped Dane Coulter is mourning the loss of his best friend, fellow Special Ops buddy, Cody. Oh, Cody didn’t die. It’s worse. He’s getting married. Cody is, in Dane’s opinion, whipped. Dane swears he will never suffer the same fate. But when he meets a woman who can take all his dominant loving and beg for more, he realizes he may have met his match. It’s a damn shame she’s the one woman in the world his man-code deems untouchable…his best friend’s sister.

Buy Stone Hard SEALs: Complete Collection on Amazon, or get it free with Kindle Unlimited

a Rafflecopter giveaway
Posted by Lexi Post at 11:18 PM