The Duck Commander Lives In My Backyard!

Nope, I’m not blogging about hot young men with scrubby beards who have lots of guns, drive way cool toys, wear camos and gig for frogs…although I may have to consider doing that one day since Duck Dynasty is my new crack.  I just love those guys!  Yeah, I know…go figure…redneck woman, redneck show with handsome redneck men.  What’s not to love?!


Okay, so back to the subject at hand…the Duck Commander.  What I’m talking about here is a duck, a real live honest-to-goodness walking, quacking, pushy, fight-picking duck.  Yes, I did say pushy and fight-picking.  Not what you think of when you think of a duck?  Well, Tubby ain’t your run o’ the mill duck.  We have the Rambo of the duck world. 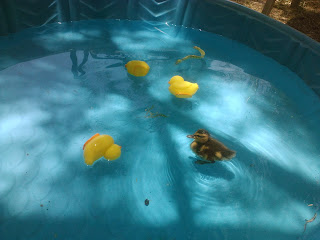 Wait…before I get into Tubby’s story, I do need to share my sad news first.  Some of you have asked me whatever happened to Scooter, the little baby Mallard duck we rescued earlier this year.  Well, I’m sad to say we lost Scooter when she was about 3 months old.  She suffered some kind of injury to her neck or back and there was nothing we could do to save her.  But she was sweet and cute and fun to watch while we had her…and she did manage to squeeze out 3 more months of life than she would have had if we hadn’t rescued her from the big duck that was intent on killing her.  But before we lost Scooter, we went out and bought her some real live friends to keep her company and while Scooter is no longer with us, I’m happy to say both her little buddies are thriving and this story is about one of Scooter’s little duck friends, Tubby.


Tubby got his not-so-glamorous name because he’s a little piggy duck—a fat black piggy duck.  Tubby is the first to the food dish and the last to leave…and he won’t leave it until the darn thing is E-M-P-T-Y!  In fact, when I go out to feed the horses in the morning, the first thing I hear is Cody neighing at me.  The second thing I hear is Tubby quacking for food.  Now, Tubby isn’t the only duck we have…he has a little duck friend named Sunny and she has vocal cords too, but Tubby must’ve got the upgraded set because that sucker can be heard 5 acres away, while little Sunny is barely more than a faint echo as she waddles along in Tubby’s wake.  Tubby is definitely the alpha duck.


Tubby has another little friend…er…maybe more of a nemesis.  I don’t know, it’s hard to tell if they hate each other or love each other—maybe it’s the proverbial love-hate relationship.  Tubby’s little enemy-friend is a mangy, toothy, so-ugly-he’s-cute, yappy little dog named Skay.  When we got the ducks, we decided to situate the duck pen next to the dog run.  What the hell were we thinking?  I’ll tell you what we were thinking…we were thinking having the dogs close at night would help to keep the coyotes away from the ducks.  Little did we know the ducks would become pure entertainment for little Skay.  The big dogs will sometimes watch the ducks, but could take them or leave them.  Skay, on the other hand, sits in front of the duck pen for hours on end, watching the ducks and barking at them.  (Good thing we don’t have many neighbors and the ones we do have think it’s cute.)  It’s like duck-TV for the little dog…sort of Skay’s version of Duck Dynasty.”
Now, you’d think having a dog running incessantly along the fence line barking at you would make you tremendously nervous if you were a duck, but you would be sorely mistaken.  Because our rotund black piggy duck, Tubby, has become very cocky and has taken to taunting the dog.  He takes every opportunity to strut along the fence line like he doesn’t have a care in the world.  In fact, if he had opposable thumbs, I’m pretty sure he’d be thumbing his nose at the dog because he seems to enjoy the incessant barking.  It’s probably some childhood trauma-induced neurosis that occurs in ducklings who are taken away from their mothers too young.  Or perhaps he gets bored and thinks, “Hey, I’m gonna go get the dog spun up…that’ll be fun!”  Who knows?  But it doesn’t end there. 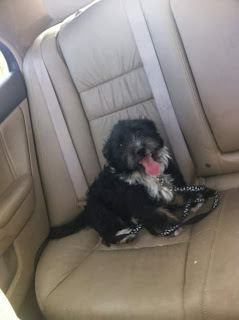 Tubby’s latest antics include actually attacking the dog, but it’s not an overt blatant attack…more of a sneak attack, sort of a sucker punch.  Tubby will stand at the fence, with his beak right up to the chicken wire we stretched along the fence to keep the dogs from reaching through.  So, he stands there with his beak just out of Skay’s range and stares at the dog while Skay goes berserk barking.  The dog lunges, the duck never flinches, never blinks…he’s the bad-ass of the duck world.  He just sits and stares at the dog, just barely out of reach.  The minute the dog stops barking to take a breath as he’s almost nose to nose with the duck, Tubby whacks him on the tip of the nose with his beek…just a quick hit, in and out, fast like a ninja.  As you can well imagine, this just drives Skay absolutely bonkers and you can almost see the duck smile as the dog escalates into a frenzy just short of foaming at the mouth.  This can go on for hours and it’s hysterical to watch if you’re not trying to enjoy a quiet afternoon on the patio.  LOL


And that’s not the only trick Tubby does.  Yesterday I was outside doing something in the backyard.  The duck and the dog were both enjoying some quiet time, as was I.  But when my neighbor came through the gate and started talking to me, the damn duck began to quack like someone had wound him up.  I knew he’d already been fed, so no reason for it in the middle of the day…what the hell?


Well, just as a little backstory…my neighbor helps out around the place.  She makes a little extra spending money by helping with the yard work and some general maintenance stuff around the place.  So for her to be in my yard is a very common thing.  In fact, we had a gate installed between the two backyards to make it easier for us to come and go.  Sometimes I will actually find her cat sitting at my door meowing because she has lost her mom and thinks she’s in my house.  It’s quite the neighborhood!


Anyway, the neighbor and I are standing in the backyard talking and this duck goes off like an air raid siren.  He is quacking for all he’s worth and staring at us…and Tubby is damn hard to ignore when he’s in serious quacking mode.  I commented that I didn’t know what the hell that duck’s problem was and the neighbor laughed and said, “Oh, I know what he wants.  You mean you don’t know your own duck?”  Huh?  She says, “Come on, I’ll show you.”  So I follow her over to the duck pen where she turns the hose on and puts it thru the fence so it is filling the area around the bushes that are in the duck pen…and I’ll be damned if that chubby black duck doesn’t waddle very quickly over to the running water and start digging for worms.  Really?  Apparently, my neighbor is now teaching our obnoxious attack duck to quack real loud when he thinks it’s time for you to come turn the water on so he can forage for worms…the Duck Commander.


I’d like to tell you a story about Sunny too, but I don’t really have any.  She’s a cute beige colored duck with absofreakinglutely no personality.  She just follows Tubby around like a sweet little shadow.  However, I did actually see her standing at the fence taunting Skay the other day.  Monkey see, monkey do.  She ain’t the sharpest knife in the drawer, but it appears she’s picked up at least one trick from her paunchy black sidekick.

So, that’s the end of my duck tale…that’s my story, dizzy and ducky, and I’m stickin’ to it.  Hang on tight now ‘cuz we’re gonna go real, real fast!


Kayce
Posted by Kayce Lassiter at 4:00 AM