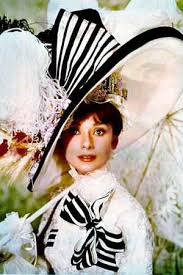 I am a creature of habit and routine. I also love movies as much as I love books. One of my routines is to iron my work clothes for the week on Sunday mornings (I know, isn’t that just sad?) BUT while I’m ironing, I treat myself to a movie (I love the Turner Classic Movie channel). So this last Sunday morning, I had the good fortune to turn on My Fair Lady (yes, I love this movie!) and what do you know, it was my favorite scene. Audrey Hepburn is all dressed up for the races and doesn’t she look absolutely beautiful but when she says, and I quote “Come on, , move your bloomin’ ass”, I can’t help myself…I crack up. EVERY TIME, no matter how many times I’ve seen it.
Which got me to thinking. There are always scenes in movies, as well as books, that are so well done, they make you laugh, cry, sigh or even gasp…case in point, the movie Australia….Hugh Jackman (be still my heart) spends much of the movie looking kinda scruffy (but oh so gorgeous) but in this scene, he meets the heroine at a dance and he is ALL cleaned up and…well….I couldn’t stop myself. I actually gasped. In front of my DH, who had to ask if I was okay (and no, I couldn’t explain why I gasped, just that I was all right….and did I replay that scene when he wasn’t around….oh, you bet!).


Forgive me, I have once again digressed. I was talking about favorite scenes. In The Legend of Zorro, it’s when Antonio Banderas and Catherine Zeta-Jones dance, which is wonderful, but my favorite scene from that movie? The sword fight in the stable. Loved it.

Dances with Wolves….actually no stand out scene….the entire movie is fabulous (as was the book), but if I had to pinpoint one scene, it’s when Kevin Costner and Mary McDonnell are at the river and she says “I am in mourning” before they start kissing.


Ferris Bueller’s Day Off? Who can say that the scene where Ferris Bueller is on the float during the parade and he sings Danke Shoen as well as Twist and Shout isn’t their favorite?


Steel Magnolias has that heartbreaking scene at the funeral when Sally Field breaks down but when Olympia Dukakis grabs Shirley MacLaine and says “Here! Hit Weezer!”, you laugh even though you’ve been crying. You just can’t help yourself. 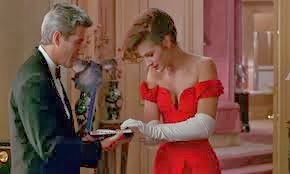 And in Pretty Woman, my favorite scene (and it’s not the happily ever after scene which may surprise you) but the one where Richard Gere and Julia Roberts are going to the opera. He shows her the necklace then snaps the lid of the jewel box closed and she gives out that burst of surprised laughter. Did you know that scene was never written into the script? It was an adlib by Richard Gere but was so perfect in its execution, Garry Marshall kept it in.

So, I’ve told you some of my favorite movie scenes….what are some of yours?