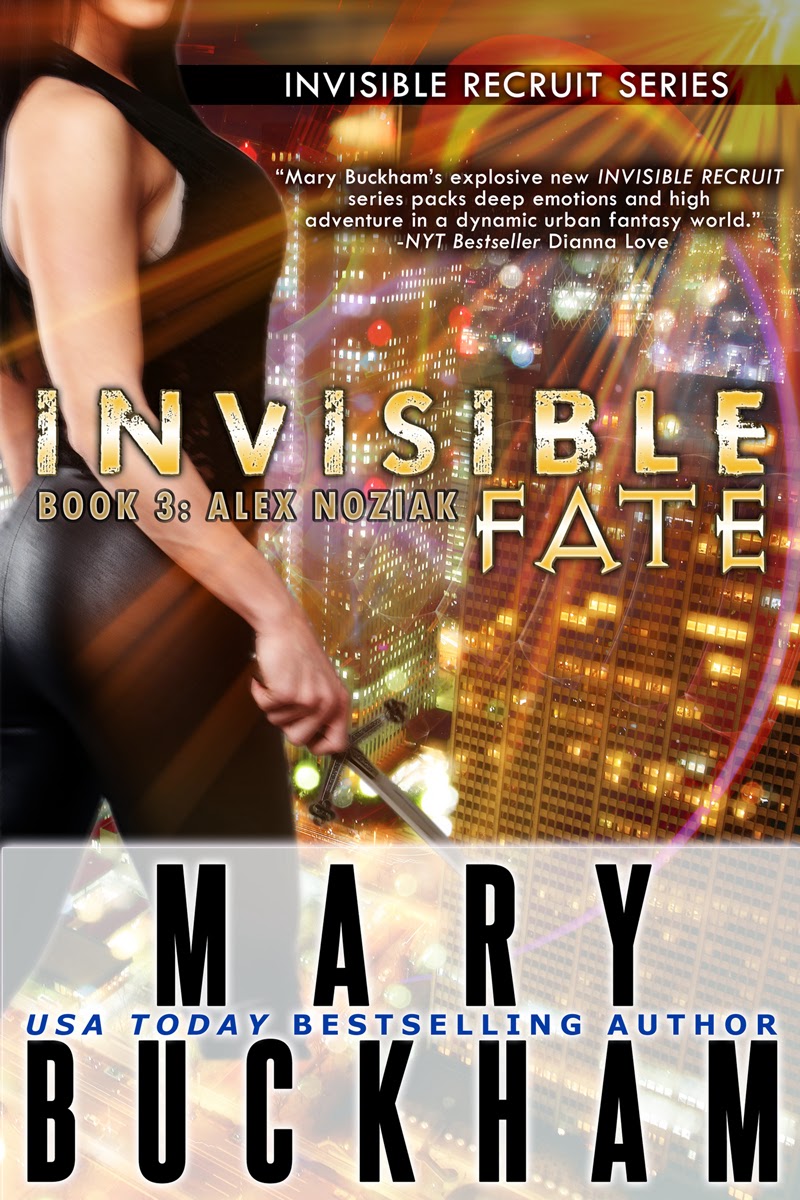 Alexis: Today we have Paranormal Romance author, Mary Buckham who is giving away an ecopy of one of her books, winner’s choice! Just leave a comment at the end for a chance to win.

So Mary,what are your favorite traits of the two main characters in Invisible Fate Book 3: Alex Noziak?

Mary: Alex is willing to do the hard things regardless of the cost to herself and she’s also vulnerable though she hides it well beneath her wit (or should we say sarcasm). Bran is a self-made man who’s very comfortable with what he’s achieved but he’s not so comfortable falling for a witch/shaman woman who turns his world inside out.

Mary: A traffic ticket (fortunately it wasn’t mine) but it made me aware of how we quickly learn to spot speed traps and cop cars. They all have a similar look and feel to them. So what if you trained agents who were not law enforcement trained initially but came from everyday backgrounds? Would they be able to infiltrate some situations better? And what if you gave the new recruits some extra mo-jo with paranormal abilities they had to keep hidden for most of their lives? The series came from there.

Alexis: Very cool idea. What made you chose your title?

Mary: I think at some time most women have felt invisible. I wanted to use that feeling and turn it upside down into an asset instead of a liability, so each book in the series celebrates the fact that women might feel invisible but that doesn’t mean they don’t have a whole lot to offer the world.

Alexis: I agree. What was the strangest thing that inspired a story for you?

Mary: Everything contains inspiration. A newspaper article from the 1800s about a little girl escaping an orphanage wearing two sets of clothes. Her work clothes on top and her best clothes underneath so when she found her mother her mother would be happy with her. A snippet of conversation. The look a man gives a woman who’s unaware of it. Figuring out how to bribe a fisherman to cross the Mekong River from Thailand to Laos. (probably not one of my smarter ideas but hubby was with me).

Alexis: What was your very first writer’s conference?

Mary: I think it was an Emerald City Romance Conference in Seattle. I was so new that I’d only been writing a few weeks and packing up, driving across the state and being surrounded by people like me, who had stories in their heads and dreams in their hearts, was just what I needed. I also remember sitting at a dinner table and every single person there was a New York Times author: Jayne Ann Krentz, Stella Cameron, Linda Lael Miller, Debbie Macomber and a half dozen more. Led me to believe every romance writer could be a NYT author.

Alexis: Wow, talk about inspiring.  Thank you so much for visiting us here at Happily Ever After Thoughts.

Novel three in the paranormal romantic Suspense series, featuring Alex Noziak and the team members of the Invisible Recruits Agency

Forced to choose, will dark magic be the only path.

Hidden from a world unaware of magic, a recently and only partially trained group of operatives known as the Invisible Recruits are the only ones willing to stand between mankind and those powerful preternatural factions seeking to change the balance of power and gain world domination.

Alex Noziak, part/witch, part/shaman, is imprisoned by a powerful Druid bent on changing her into a black-magic portal to release a three thousand year-old demon on the world.

By trying to shield a juvenile witch from the Druid, Alex places the lives of her IR teammates in jeopardy.

Her relationship with Bran is in turmoil, making him the last man she'll turn to . . . but the only one who can help her.

Alex is placed between watching Bran die or saving the world. Choices. Choices.

USA Today Bestselling author, Mary Buckham throws her readers into a world of danger, explosive conflict and dark magic as the team learns to fight the dark paranormal forces out to overthrow the world of humans.

Mary lives in Washington State with her husband and, when not crafting a new adventure, she travels the country researching settings and teaching other writers. Don't miss her latest reference book Writing Active Setting.
Links
Websites: http://www.marybuckham.com
http://www.invisiblerecruits.com
Facebook: http://www.facebook.com/Mary.Buckham

Alexis: Don’t forget to leave a comment for Mary and you will be entered to win your choice of any of her novels in ebook. Good luck!
Posted by Alexis Walker at 12:00 AM