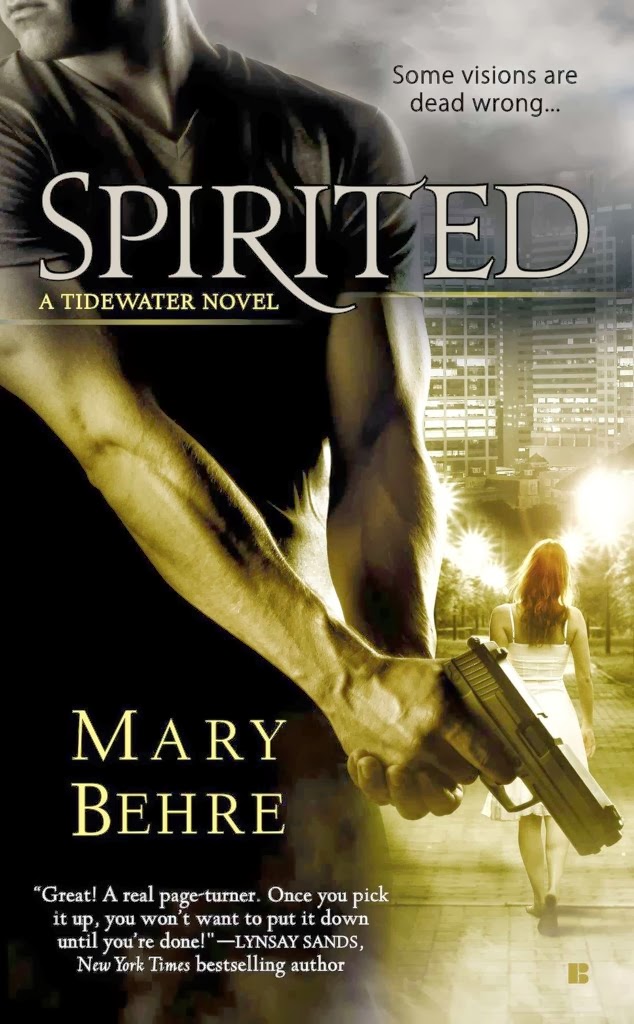 Alexis: Today we have Paranormal Romance author, Mary Behre who is giving away a signed copy of SPIRITED and some cool swag  to one lucky commenter.

So Mary, What are you working on now?

Mary: A lot. I’m celebrating the release of SPIRITED. That means lots of promotion and blog tours on fabulous blogs like HAPPILY EVER AFTER THOUGHTS! In January, I turned in book two, GUARDED, which is due out August 5, 2014. So I’m also in the middle of copy edits for that book. And, I’m writing book three, ENERGIZED (working title) :-)

Alexis: Why did you choose this genre to write in?

Mary: Probably the same reason most romance readers do, I like happy endings. Life, while usually wonderful, doesn’t promise a happy ending for everyone, romance novels do.

Alexis: Yup, that’s why read it :-) What are your favorite traits of the two main characters?

Mary: Jules has the worst sense of direction. It’s a trait that gets her into trouble and introduces her to people she might never have met otherwise.

Seth is dedicated. As a teen father, he was dedicated to his daughter and her mother (his first wife). As a cop in Tidewater, he’s dedicated to protecting his city. For all his dedication, he’s not perfect. And it’s his imperfection that makes this big, sexy hero so loveable.

Mary: The best piece of advice I received came from my fabulous critique partner, Valerie Bowman. When we met, neither of us were published and we discussed time and again what we wanted from our writing careers. At times, I wanted to give up but she never let me. Her advice never waivered, “You’re good. Go big or go home!”

Alexis: I like the way she thinks! I imagine you learned a lot along the way. What was the first writer’s conference you attended?

Mary: My first writer’s conference was a small chapter conference at First Coast Romance Writers in Florida. I went down because the guest speaker was Suzanne Brockmann. One visit at this amazing chapter, and I was completely hooked. I’ve been a chapter member ever since.

Alexis: Mary, thank you so much for being with us on Happily Ever After Thoughts. I’ve been cheering you on from the sidelines for a while and I’m so thrilled to see this book go into print.

Mary is curious about what readers think makes a hero sexy. Let her know in a comment and you will be entered to win a signed copy of SPIRITED and some cool swag! Check out this excerpt!

Excerpt from SPIRITED:
Jules sat dumbfounded in the bedroom of a Greek god. He had espresso brown eyes, curly black hair, a long nose that had probably been broken a time or two, and a sexy, dimpled chin. His tan, muscular body was covered by a chest full of springy hair that begged to be touched. Dang! He even smelled good, like soap and the salty Tidewater air.

He scowled at her, waiting for an answer. Although to save her life she couldn’t think of anything. Where was she? More important, what was she doing here? Then a mental switch flipped and it all became clear.

That freaking ghost! Jules couldn’t very well tell a cop she stumbled into his apartment because a ghost made her do it. He’d haul her off to the loony bin.

“Well.” Jules fidgeted against the cuffs and tried to adjust to a more dignified position on the bed. So not happening. “No, not really. I was trying to go home but, uh . . . locked myself out.”

He arched an eyebrow at her but didn’t say anything.

“I know this looks bad but just ask Big Jim. He’ll vouch for me.”

“What? No!” She laughed and shook her head at the absurd thought. “He’s my dad.”

“Is that what they’re calling them these days?” He scoffed but didn’t give her time to respond. “There’s no one named Big Jim in this building. Try again, the truth this time.”

“Ernie Ward! Ernie is my dad.”

“I thought his name was Jim.” He shook his head. He made a sound like a buzzer. “Wrong again. I’ve known Ernie for years but I’ve never seen you before. Want to try another name, honey?”

His biceps flexed, arms still folded across his chest, as if he wanted to move but barely restrained himself. The sight was distracting. He wasn’t exactly muscle-bound, just finely honed. He stood fierce and masculine like an ancient warrior. Intimidating but ruthlessly sexy. It made her want to . . . She shook herself inwardly.

Why couldn’t she think straight? This so wasn’t like her. She didn’t go gooey over any guy, regardless of how ruggedly handsome. But her heart pounded at an erratic pace and she’d once again lost the thread of the conversation. What had he just asked?

Think, Jules! Ignore the instant pull of pointless physical attraction. It had never done her any favors in the past anyway. Something about him must be repellent. Find it!

She looked at him again, this time skating her gaze past his naked chest and sexy arms and moving down.

Resisting the urge to laugh, she latched on to righteous indignation and straightened her shoulders. This condescending jerk treated her like a criminal, handcuffed her and called her a liar. Oh, he was going down.

“My name’s Jules. Not honey,” she snapped. “And Big Jim—Ernie—is my father. He lives in this building and I live with him.”

“I highly doubt it. Hookers don’t live here,” he said, tugging a red T-shirt over his head.

“Really?” he said, giving her an obvious once-over, his gaze settling on her bustier.

“Enlighten me.” He narrowed his eyes, doubt etched on his face.

“See, there was this costume party and . . .” Her words trailed off. How to explain the theme of her college reunion without sounding like an imbecile for dressing in the ridiculous outfit just to win a blue ribbon? Now that she thought about it, stupid might aptly describe her decision-making skills tonight. “Well, there was a Pimp and Ho party earlier tonight. I was on my way home from it—”

“And you just happened to climb into my window?”

Jules opened her mouth to respond, but doubted he’d believe her anyway. So she settled on a half-truth. “It was a mistake. I meant to climb into Big Jim’s window, but it was jammed and yours was . . . open.”

“Ah ha!” His mouth twisted into a satisfied grin. “You admit to breaking and entering.”

“Not breaking. Just entering. And who in his right mind sleeps in this city without a screen in his window anyway?” Oops! She hadn’t meant to say that last part, but she pushed on. “If you’ll just let me go find Big Jim—”

“Don’t think so.” With a grim expression on his face, he tugged her to her feet. “Time to go.”

“Where are we going?” Jules dragged her heels, her stilettos scraping the wooden floorboards.

Still in his pajama bottoms, he jammed his feet into a pair of loafers.

Jules gaped. The gladiator image of him fizzled with each passing second. “Are you really planning to go out in public dressed like an overgrown four-year-old?”

“Shut. Up,” he growled, jerking on a knee-length, brown leather coat. “Say another word and I’ll charge you with resisting arrest.”

“Wait, uh, I think there’s been some mistake.”

“You bet your sweet ass, there has.”

“Please, not jail!” Her words ended on a squeak, but she couldn’t help it.

Earth-bound ghosts, bent on driving the living crazy, seemed to love hanging out in graveyards and jails. When they realized she could actually hear them, she’d be defenseless.

The needy ones would annoy her, but the evil ghosts—who’d managed to elude the hell beasts that usually put them where they belonged—they could attack en masse.

Their vicious thoughts would seep into her consciousness like a staticky radio she couldn’t turn off. They could strip her of her sanity. A single night in jail nearly drove her mad once before. She doubted she’d survive it a second time. 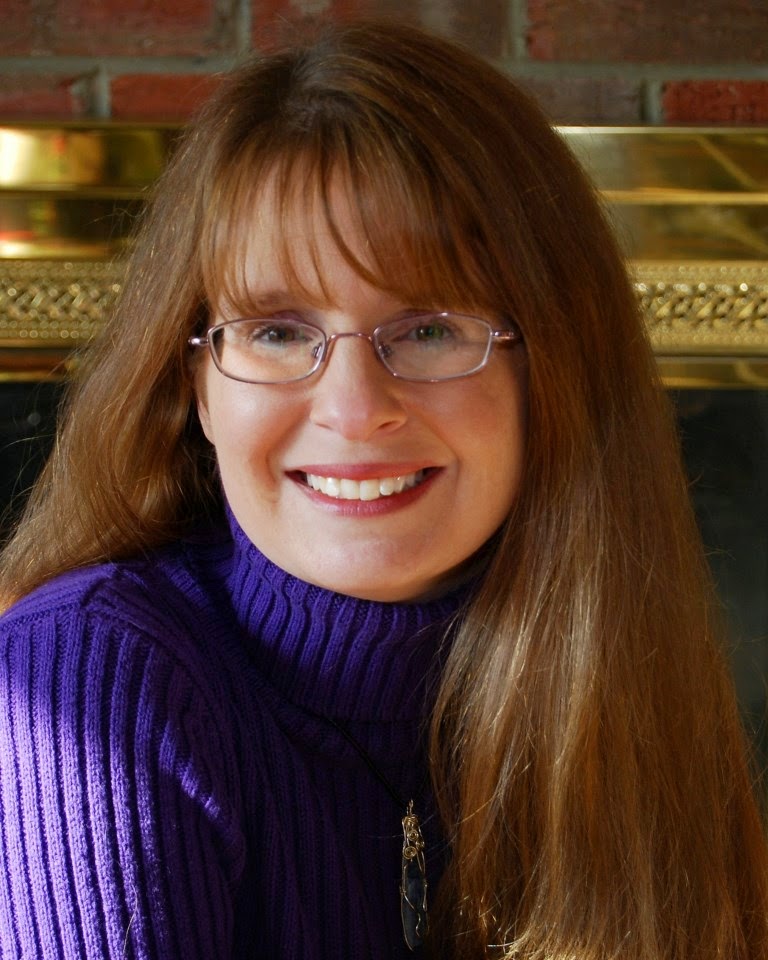 Mary Behre is the lone female in a house full of males and the undisputed queen of her domain. She even has the glittery tiara to prove it. She loves stories with humor, ghosts, mysteries and above all else, a good romance. When not writing, she enjoys reading, gluten-free baking, and hanging out at the beach with the most important men in her life, her family.

Her debut paranormal romance, SPIRITED (Tidewater Novel #1) was an award-winning manuscript before it sold to Berkley Sensation. The Tidewater Series is mix of humor, suspense, and a psychic love-connection. The first three stories are about three sisters separated years before in the foster care system. As they search for love, each other, and a way to live with their psychic abilities, they’re tossed into the middle of mysteries that only their unique gifts can help solve.

Alexis: Don’t forget to answer Mary’s question for a chance to win a signed copy of SPIRITED and cool swag!

What makes a hero sexy?
Posted by Alexis Walker at 12:30 AM